The Hubble found a galaxy that is “bursting at the seams” 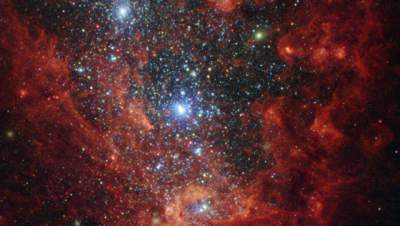 Galaxy is located at a distance of 11 million light years from Earth.

Small galaxy NGC 1569 in the constellation of the Giraffe was the most restless neighbor of the milky Way – due to an overactive processes of star formation, it is actually “bursting at the seams,” according to the website of the space telescope.

The galaxy NGC 1569 is one of the small “star cities” in the short space district of the milky Way – it was opened in 1788 by the famous British astronomer William Herschel. It is located just 11 million light-years from Earth, thanks to powerful telescopes like the Hubble can see individual stars in it.

This dwarf galaxy was suddenly attracted the attention of scientists in 2008, when Hubble first took photos of stars in its outskirts, and found out that she actually is 1.5 times farther from us than we think. This has translated NGC 1569 among one of the most unusual objects in the Universe – super-active galaxies in which the processes of formation of stars go with an extremely high speed.

New images of NGC 1569 obtained with Hubble, show that the stars in this galaxy formed 100 times faster than the milky Way, which is way more than all the others “star megalopolises”, and is comparable with the rate of birth of stars in the first galaxies of the young Universe.

The reason for this “tresana at the seams”, as expressed by scientists can be that the gas in NGC 1569 shuffled her “neighbors” of the cluster of galaxies IC 342, in which it is included. Mixing of the gas leads to the formation of dense clumps of matter, “star nursery,” and the formation of hundreds of new stars in them.