The bear attacked the participants of the marathon in new Mexico 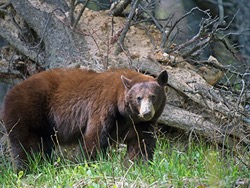 Dipper on Saturday, June 18, attacked the participants of the marathon in the U.S. state of new Mexico. Reported by ABC News.

During the race on the plot, which runs through the national Park, one of the women attacked the female American black bear — American black bear. As suggested by the Park staff, the animal decided that the runner is going to harm her baby, climbed a tree next to the route.

The woman received multiple bites and scratches, she had dissected the skin of the head, there are wounds on the neck and shoulders. The victim was given first aid by other participants of the marathon, after which she was taken by helicopter to the hospital. Doctors claim that a woman’s life is not in danger.

The Park staff are now looking for the man attacked the bear to sedate it and take a test for rabies.

Black, or black bear is distributed throughout North America. From brown bear is fur color and size — black, usually slightly less. It eats mostly plant foods and insects eating carrion, trades in landfills. It is believed that Baibolov very rarely attack people and when meeting a person prefer to flee.