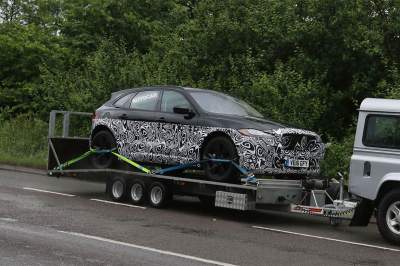 The car will be sold only in hybrid or fully electric versions.

Jaguar is testing a car a little larger than F-Pace. According to rumors, the prototype could become a new model – J-Pace. She could be the first car company in the segment of luxury electric cars.

With high probability, the new SUV will be sold only in hybrid or fully electric versions, making it an alternative to plug-in hybrid versions of the BMW X5 and Mercedes-Benz GLE, and Tesla Model X and the Audi Q6 e-tron, which should appear soon.

According to rumors, the British company will offer electric vehicles in a unique body to help in the positioning of these machines separately from the rest of the lineup. So, for example, came in a BMW, creating a sub-brand “i”, in the same way is going to go and Mercedes-Benz with its next generation of electric cars.

Test sample J-Pace, it seems, is equipped with a diesel-electric powerplant, although this option is likely to be is only for Europe. For China and the United States almost certainly will be offered a fully electric version or a vehicle with a gasoline-electric installation. For the first time Jaguar Land Rover has demonstrated to the wide public their experience in the field of hybrid and electric cars just a year ago. A test mule that passes the tests, it may be the first sign that Jaguar is in the early stages of development of the production version of the car with such technologies.

According to rumors, the company is also working on an SUV smaller than F-Pace. He has also been spotted on tests some time ago and, most likely, will be called E-Pace.