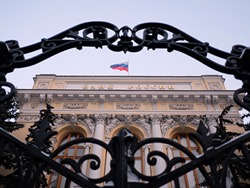 The number of banks offering non-market rates on deposits, in the first quarter was reduced to 42 credit institutions with 140 at the end of 2015. This was stated on Tuesday, June 14, the Chairman of the Central Bank Mikhail Sukhov, transfers “Interfax”. He added that 17 out of these 42 banks offer rates at two percentage points above the base rate calculated by the Central Bank.

“We do not support aggressive, economically unjustified policy of dumping on the Bank Deposit market”, — said Sukhov. He reminded that that is why contributions to the Deposit insurance Fund have been differentiated depending on the level of rates on deposits banks.

In addition, it introduced a system of increased contributions to the Fund for the banks that are “visible signs of financial problems.” The system in the first quarter raised 125 banks.

A bill allowing the Central Bank to limit rates on Bank deposits, was adopted in December 2012. Prior to that, the maximum rate on deposits set by the Bank of Russia, were Advisory in nature, although the regulator could use other methods of exposure.