Home / Photo report / The apartment is decorated based on the novels of Jules Verne. Photo

The apartment is decorated based on the novels of Jules Verne. Photo 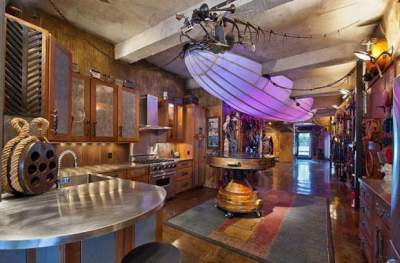 Steampunk style for the most daring.

In new York’s Chelsea district 120 West 29th Street, is an unusual apartment in the steampunk style. We offer you to spend a small tour around the mansion and maybe be inspired to innovate in their own homes.

Steampunk is a genre that emerged in the late 80’s-early 90-ies of the last century. It lies at the intersection of science fiction, alternate history and horror (of horrors). The main symbol of the cult of steampunk – the presence of the steam engine. As for eras, then here could be anything – and the Wild West, and the post-Apocalypse, and the Victorian era, alternate history, or even all at once. 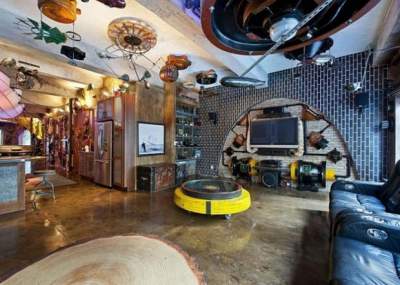 Apartment in Chelsea is completely impregnated with this spirit: when you enter the property you’ll come across a designer creation from a submarine with a porthole. The kitchen is also made according to the latest trends in steampunk. In General the apartment was made entirely to order – from the grey concrete floor to a futuristic airship with LEDs with a length of almost 9 meters, suspended from the ceiling. The apartment has a terrace with an area of 46 square meters, on the same floor are przedpokoj, bedroom and two bathrooms.

The housing, made in the style of steampunk, futuristic always viewed innovation or anachronistic technology – the ideals of the progressive movements of the Victorian era, which are based on the most advanced canons of fashion, architecture and culture of the period. 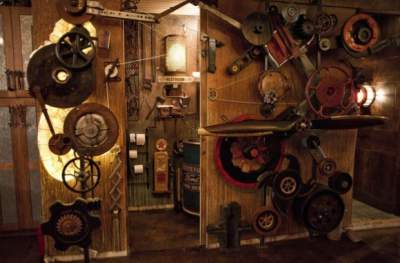 Such technologies may consist of invented machines, reminiscent of “Jules Verne” or “warsawski”, aircraft, analog computers and other inventions.

Also in the apartment there are modern items “under steampunk” — the so-called mechanical pseudoliterary steampunk.