Home / Sports / Tennis in Ukrainian: to win Stakhovsky in Galle, the failure of the Ukrainians in Birmingham

Tennis in Ukrainian: to win Stakhovsky in Galle, the failure of the Ukrainians in Birmingham 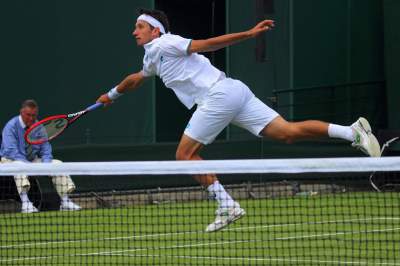 Ukrainian tennis players continue with varying degrees of success to perform at the tournament of series ATP and WTA.

Stakhovsky on the German grass tournament in Halle he passed the way from qualification to the second round. Ukrainian in protracted three-set winner of the match beat the 60th ranked Denis Kudla.

Stakhovsky was able to finish the match in two games, but in the second set with the score 3:2 missed a triple break-point. In deciding Sergei confidently held his serve at the reception took advantage of the third break point.

For an exit in the quarterfinals of the tournament Stakhovsky will face fifth seeded David Goffin. In two previous internal matches were won by the Belgian.

In Birmingham both Ukrainian tennis players are unable to take the start-up barriers. Tsvetana Pironkova, beating in the final of the qualifiers Kateryna Bondarenko in the first round defeated Lesya Tsurenko.

Elina Svitolina for the defeat of Carla Suarez-Navarro can blame only itself. The first racket of the country in the final set, led 5:3 and there was one ball from a match-bol. Instead of the logical conclusion of the match, Svitolina gave four consecutive games.