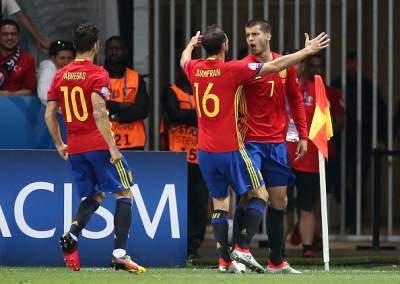 Traditionally summing up the statistical results of the second round of the group stage of the European championship.

Compared to the first round of the performance at the European Championships insignificantly increased in 12 matches teams scored 24 goals (2 goals per game). Especially tried the Spanish and Belgians, three penetrated the defense of Turkey and Ireland, respectively.
The best performance of Spain and France (2 goals per game). Ukraine effective action is not yet pleased.

Only Dimitri Payet (France), Bogdan Stancu (Romania) and Gareth bale (Wales) scoring in each match for Euro 2016. There were also the first authors of the duplicates – two goals in the second round, scored by Romelu Lukaku (Belgium) and Alvaro Morata (Spain).

Portugal continues to mock the fans in the matches against Iceland and Austria Ronaldo and company struck 50 times and scored only one goal. Far behind team Fernando Santos go England (37), Croatia (37) Belgium (36). In the national team of Ukraine on 20 shots (7 on target).

Hannes Halldorsson remains the most hard-working goalkeeper for Euro 2016 – the goalkeeper of the national team of Iceland for two matches parried away 14 of 16 shots on target of their goal. Andriy Pyatov and Robert Almer with 12 sawami tied for second place. Further along the Goal Ciprian (Romania) and Petr Cech (Czech Republic) – eight rescues the goal.

Football team of Ukraine for 180 minutes in the matches with Germany and Northern Ireland 21 times broke the rules and earned 23 free throws. The toughest team remains Switzerland (32 fouls), most other rules violations on themselves collect the players of the national team of Romania (37 free throws, including two earned penalties).

The symbolic team of the second round of the group stage of Euro 2016: