Home / Sports / Ukrainian boxers-professionals will not perform at the Olympics

Ukrainian boxers-professionals will not perform at the Olympics 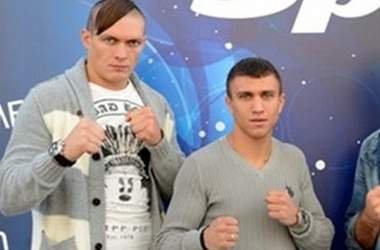 Leading Ukrainian boxers are not going to the Olympic games in Rio de Janeiro.

As you know, the international Amateur Boxing Association, without any limitation allowed professional boxers to participate at the Olympic games. Enthusiasm the news in the world of Boxing did not cause, and some of the leading Boxing organization openly declared the disqualification of boxers from their ratings if they are in Rio de Janeiro on fighting against Amateurs.

As for Ukraine, at the moment the team has three Olympic licenses to the Games qualified Mykola butsenko, Dmitry Mitrofanov and Tatyana Kob. This list is unlikely to be replenished eminent names of Ukrainian professionals to the Olympics will not come.

Oleksandr Usyk begins preparations for the September fight, but Wladimir Klitschko will soon fight with Tyson fury. But I think that at the Olympics 2020, we will see leading professionals,” – said Advisor to the President of Federation of Boxing of Ukraine Dmitry Gaystruk.

It is understood that the statement of Gastrula was done to the movement information of the fight between Klitschko and fury. It is expected that the boxers come in the ring not earlier than October, and that means that the probability of the appearance of Vladimir in the July qualifying tournament cannot be ruled out.