Home / Society / In Kazakhstan, the attempted murder of teledive was the reason for the issue of the crossword puzzle

In Kazakhstan, the attempted murder of teledive was the reason for the issue of the crossword puzzle 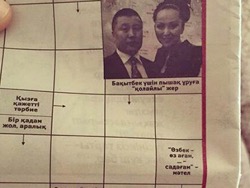 The scandalous incident with the well-known Kazakh TV presenter and producer Bayan Esentaeva was the reason for the issue of the crossword puzzle printed in the newspaper. A scan of the puzzle on Tuesday, June 28, shared on his page in Facebook by a resident of Kazakhstan Azamat Sarsenbayev.

In the task are invited to guess which place husband teledive was easy to stab her. Users were shocked by the cynical question of the puzzle. “I guess the person who made this crossword was a little crazy,” wrote Sarsenbayev. However, some visitors tried to find the answer to a strange question. Among the responses was the leader of “gas stations” and “auto”. Sarsenbayev did not specify what newspaper published this crossword puzzle.

As NUR KZ reports citing law enforcement officials, June 10, husband of TV presenter Bakhytbek Yesentayev went to Almaty airport to meet her wife. Yesentayev was drunk so the car was driven by his nephew. At the airport he forcefully pushed her up all the way and beat her in the back seat. In one of the gas stations located on the Kuldzha tract, on the road from Almaty to Talgar, Yesentayev kicked the nephew out of the car, closed the car and hit his wife with a knife in the stomach.

On the same day, Bayan Yessentayeva was admitted to the district hospital Talgar with damage to the eyes, closed cherepno-a brain trauma, periorbital hematoma, and penetrating knife wound of an abdominal cavity through injuries large and small intestines retroperitoneum. According to doctors, the woman will need to reposition the nasal bones.

Bakhytbek Yesentayev arrested for two months. He is charged with two articles of the Criminal code of Kazakhstan about causing harm to human health and attempted murder.