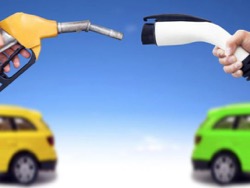 We are not yet fully realized the scale of the disaster, but de facto the car in its usual form is living its last 10-20 years. In the past year, the leading countries-manufacturers signed a killer for industry documents, and are preparing to begin the implementation of the commitments.

The turning point is to recognize СОР21 climate summit, held last year in Paris. It was then that the leading automobile powers, including Germany, Britain and several U.S. States (CA, NY) have signed a voluntary commitment to abandon the production and sales of classic cars with ice (internal combustion engine) already in 2050.

You say: Yes, Germany is part of the United States is not the whole of the country. However, the auto industry is a global phenomenon, and by “opinion leaders” will have to adapt to smaller players, so no doubt that Europe in the Alliance with the United States is able to deploy the Titanic of the car industry on a new course.

Closer than you think

As for the year 2050… It is not so far. The Deputy Minister of economy of Germany Rainer Baake said that if his country intends in fact to abandon the car in 2050, their sale should be stopped completely at the latest by 2030, the average period of ownership of personal cars in Germany — 20 years.

Development of a new generation, including car testing and production organization, is engaged in 4-5 years. The novelty of the electric cars for the mass automotive industry, this period will be slightly bigger: 7-8 years. This means to implement the ambitious plan is already in 2022-2023 years of the engineering centres of car manufacturers must be fully focused on the development of electric vehicles. Of course, a smooth transition begins early, but after that date on new vehicles with internal combustion engines will have to forget in an order.

Germany in theory restrains the inertia of its own industry, but Germany and a number of countries without a major auto industry, decided to set an example to the world. So, the ruling circles of the Netherlands and Norway have, in fact, agreed on a complete ban on the sale of cars with all types of internal combustion engines in 2025. It’s not just about traditional cars, but all the variants of the hybrids.

Initially, green party, the Netherlands lobbied for the initiative banning in 2025, not only the sale, but even the use of cars in principle, but it was rejected: we agreed to ban sales.

Norway, meanwhile, is the most electromobility European country, which does not prevent even relatively cold climate (in fact, in populated parts of the country it is much softer than Russian). However, these results are mainly due to the frantic state incentives for the purchase of “green” vehicles, like the Nissan Leaf or Tesla Model S.

For the sake of justice it is worth Recalling that the EU, USA and Japan have long been obsessed with the idea of radical reduction of emissions of CO2, which, according to some scientists, is the main provocateur of the greenhouse effect (it is more active than nitrogen and oxygen absorb solar radiation).

For many years the EU is going step-by-step preparation for 2020, when every carmaker is obliged to produce cars, the average CO2 emissions which are within the limit of 95 g/km In first approximation, the CO2 emissions proportional to fuel consumption, and this provision means that the average fuel consumption of all produced in Europe, machines in 2020, to meet the 4 l/100 km.

In practice this means the following: for example, Audi wants to keep in the model number heavy duty Audi A8 with engine capacity of 550 HP (CO2 emissions of 290 g/km). Then after 2020 it will need to balance so many cars of small to average emissions to meet the limit of 95 g/km for Example, Audi will have every powerful A8 to sell 22 car similar to the Smart ForTwo with cahuachi 54-strong dizel’kom (CO2 emissions — 86 g/km). In this Smart, as we know, Audi has nothing to do, whereas in the framework of the concern VAG alternatives, yet not so much: for example, even the little Volkswagen Up 1.0-litre Bluemotion engine vykladyvaete 98 g/km.

In short, the largest producers are already preparing to focus mainly on economy and compact cars or electric vehicles. After all, the last formally CO2 emissions are 0 g/km (at least, if not to take into account the way we produce energy). So, with electric cars can “balance” the sale of powerful cars, which are very important for the German automotive industry.

All this for what?

All for the sake of saving the planet from global warming. Cars with internal combustion engines emit CO2, it absorbs sunlight, increases the average temperature, become more powerful hurricanes, melting glaciers, extinct marine animals… And since by themselves, the car manufacturers are not interested in the rejection fostered internal combustion engine to the demise of oil, they need to make arbitrary decision. That happens.

However, electric issues, no less. Yes, Holland has famously decided to abandon the car in 2025, although there is still no electric, able to move to Holland from North to South without recharging. Tesla says a beautiful figure the maximum runs, but experience shows that when driving in a familiar car, the rhythm, Yes, with included “stove”, 300+ miles the Model S is not passing. A Tesla is something like “premium” electric cars, while the vast majority of electric vehicles like the Nissan Leaf or Renault Zoe, calculated on the nameplate mileage of about 160 km, but in reality 80 — 100km depending on conditions.

Of course, there’s another ten years on an ambitious task, but the irony is that electric cars with mileage 80-150 km on a charge existed in the 70-ies of the last century, so since then, alas, the progress though, but I can’t say revolutionary. For the mass of the leading market for the electric needs sources of “clean” electrical energy, and although Europe is actively building wind farms, and to produce CO2-neutral biological methane is even used cow dung, opportunities of “green” energy is not enough to supply the many millions of electric cars. Worse, the same as Germany abandons nuclear energy (after Fukushima) and Russian gas (after Crimea), reviving… coal-fired power plants, making electric cars very very strange phenomenon, more like a profanation. With the same success it is possible to restore the locomotives to replace diesel locomotives.

De facto, in the current power system, the main and almost only advantage of the electric car is a local ecology: it does not shit where he goes. However, many questions remain, not only to the methods of electricity generation, but also, for example, environmental hazards in the production and disposal of batteries — and they have an electric is not like a car.

What can we expect?

Whether you are implementing a radical scenario or not — hard to say, and much will depend on including the state of the global economy in the coming decades. After the transition to electric vehicles — a huge and very expensive task, which involves a revolution in particular in the field of the generation and transmission of electricity. Current initiatives are more political than “natural” nature, and the industry will not be easy.

And we need to get used to the idea that turbo-consumption with low online will become the norm that the machines will shrink and become more expensive. And the times when prized powerful engines and good chassis are fading.

Russia is immune to such trends, since, in principle, comes in the Wake of the environmental fever. But the time lag is not so great: this year Russia introduces the norms of Euro-5 for cars and fuels, and our own auto industry is not too independent, not to depend on Western trends. Therefore, if electric the fever doesn’t break his neck in the coming years, albeit with a delay of ten years but will get it to us.