Home / Society / The unbearable heaviness of being. Authorities are confident the attack on the middle class

The unbearable heaviness of being. Authorities are confident the attack on the middle class 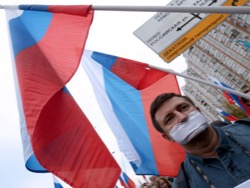 Authorities are confident the attack on the middle class

For many years famous in Russia, “Putin consensus” was supported by not only a relatively acceptable standard of living, which provided citizens the current government, but its quality is characterized by including the respect for “private space” of most Russians.
Show more… of Course, this could not dream of those who dreamed of “Russia without Putin” – but for keeping away from the policy of economic and personal freedom was the essential Foundation of everyday life.

In the last few years the situation began to change radically in several directions. The authorities increasingly encroach on the “territory of freedom” new restrictions on non – political character-and, in my opinion, the continuation of such a policy is fraught with even more dangerous consequences than, for example, a General decline in standard of living or the refusal of indexation of pensions or salaries of civil servants.

To cite just a few examples.

Consider, first, the situation with the rights of debtors. In Russia, Bank loans are more than 38 million people. According to the Bank of Russia, their total volume up to 10.5 trillion rubles, of which 891 billion is in loans, payments on which are violated. This is a serious problem faced in most developed countries but, perhaps, never come to her with such a stiffness, as in Russia. Since 2007, there is a norm that restricts the debtors of their constitutional right to free travel outside Russia. It is difficult to imagine that a significant portion of the debtors or nerasplativshegosya Express loans would want to say goodbye to the country, to avoid paying a few hundred dollars or euros. But the fact remains: now the right to leave deprived of almost 2 million people – only for the first five months of this year their number was added to 392 thousand people (analysts of the collection Agency “Sequoia credit consolidation” predict a rise in the total number to 4.5 million people in 2017). Only in Moscow and Moscow region live about 550 thousand persons of Russians – nearly 4% of the adult population in these regions.

However, the authorities do not stop – since January 15, 2016 came into force a law allowing debtors to limit the right to drive a car (let’s imagine this in the US and think about the political future of a Congressman or Senator who would dare to make such a law in Congress).

The whole issue of going abroad (the right to which is guaranteed by article 27 of the Russian Constitution and a number signed by the Russian Federation and international acts) acute not only to debtors but also to the civil servants: in 2014, this law effectively deprived more than 1.5 million employees of law enforcement agencies irrespective of whether they have access to state secrets or not. Frequent attempts to “security professionals” to conduct interviews, even with students of Universities who are going to the student conference, so we can assume that in this area prepare new restrictions. Thus, up to 4 million people now deprived of the right to freedom of movement.

The second factor, which starts to annoy citizens – particularly in the big cities is a different kind of fines. They are particularly common in relation to motorists. The government “spent” on infrastructure of surveillance and the arrangement of paid Parking – and is now starting to collect “tribute”. The penalty for unpaid and/or illegal Parking is in the “Federal cities” of 3,000 rubles – about Є41 (the evacuation of the car costs about 5000 rubles). For comparison, in Berlin, the standard fine for such an offence is Є10, in Paris – Є11, although the average per capita income evaluated at current exchange rates, Berliner or Parisian 3.2 times more than that of Muscovite. While unpaid fines are increased in a month by 50-100% by the referee’s decision, and in some cases for their late payment to administrative arrest for 15 days (which is not in any European country). All this applies to fines, such as speeding recorded by video camera, and challenge the imposition of a fine is almost impossible. Finally, the same Park, an hour which in most European capitals does not exceed the cost of one trip on public transport, in the center of Moscow is 2.6 times more expensive. Parking one car in the centre of the city every day for 8 hours costs about 75% of the official salary of the average Muscovite. One gets a clear feeling that the authorities are terrorizing the independent and relatively wealthy part of the population – the middle class, who for many years was the main beneficiary of economic growth in the country and support the Putin regime.

It is also worth noting a new campaign in connection with the Bank accounts opened by citizens abroad. You can understand when we are talking about the notorious “de-offshoring” (the defendants in most of these stories are, as a rule, as honest and respectable people like Sergei Roldugin) – but now the laws are changing dramatically. On 1 July this year the deadline for the submission of information about foreign accounts, then their presence will be considered a violation of the law. Characteristically, this is done for six months before 1 January 2017 Russia and the European Union will establish a system of automatic notification of the tax authorities each other about the presence of such accounts in their banks. From this moment, citizens can expect a “fine” for the use of foreign Bank accounts identified in 100% of affected vehicles (not quite, though, of course, on what specific date, which further confuses the issue). Note: only in Europe on Russian citizens registered more than 700 thousand of real estate objects (mostly cheap apartments and condominiums in tourist spots) – and any of them almost certainly implies the existence of the account, required for paying utilities and taxes. In the EU study to 80-100 thousand students from Russia, who also have an account there, and there are many of our fellow citizens. So the measure would affect at least 2 million people – and, importantly, simultaneously changing the status of a tax resident of the Russian Federation. If a man was not considered so, if conducted abroad, more than half of days in a year, now he can live outside the country permanently, but will still be a resident if has property. In other words, if, like Putin, in the garage you have somewhere in Uryupinsk is a wreck GAZ-21, and you live permanently in Belgium and have an account in Є200 thousand, there is no guarantee that in 2017 the money will not belong to the Russian government (or at least, they will not be shown to his requirements).

Can be quite long to list all the creative innovations of the last time – the increased cadastre value of land and property, which in the conditions of crisis became above market, to the requirements for individual entrepreneurs have on your account for the payment of tax at least twice the amount than the tax payment, but it is so obvious that the authorities are confident the attack on the middle class, on the layer of 10-15 million people, which is something I managed to achieve in the new Russia and which was and will remain the most active part of society. The government continues to do a lot for state employees and retirees, seeks to prevent social and economic protest in these towns or regions which the French would call défavorisé, does not reduce the financing of social programs. However, experience shows that old women and employees of budgetary institutions almost never save the government from another revolution or independence – and initiate them as those independent and responsible citizens, to which Putin’s regime applies to the enemies, staying in the naive belief that even the unbearable weight of the current life will not make them so…