Home / Culture / The thing about Stairway to Heaven: why Led Zeppelin accused of plagiarism

The thing about Stairway to Heaven: why Led Zeppelin accused of plagiarism 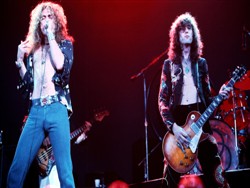 June 14, 2016 Robert plant and Jimmy page came to trial in Los Angeles in the case of plagiarism in the legendary song “Stairway to Heaven”. Theft songs musicians accused by the heirs of Randy California, who wrote similar to “Stairway to Heaven” song two years before page and plant. “Jellyfish” tells the crux of the matter.

“Stairway to Heaven” is one of the most famous songs in history. Robert plant and Jimmy page wrote it in 1970 for the band’s fourth Studio album, Led Zeppelin. An eight-minute song consists of three different pieces; it is diverse in dynamics, tempo, and genres; the page for its execution had to start now-famous guitar with two necks, one with six strings, the other with 12. No list of best rock songs is not complete without “Stairway to Heaven” in the top five, solo from it is considered one of the greatest in rock history, and membership is able to play almost everyone who has ever picked up a guitar.

“Stairway to Heaven” is similar to the song “Taurus” by Spirit. Led Zeppelin was well acquainted with the Spirit and even played with them during the U.S. tour. They probably heard “Taurus”, which was released in 1968, i.e. two years before writing “Stairway to Heaven”. The instrumental song was written by Spirit guitarist Randy California (Wolfe); he experienced due to the fact that the songs are similar, all my life (California died in 1997) — and has repeatedly said that page and plant “inspired” by its composition, but has not paid a dime and didn’t list it as co-author. “These guys made millions of bucks on the song and said “Thank you” or “Maybe we’ll pay you”?” — he was indignant. However, the court musician was not filed.

The claim of plagiarism was filed only in 2014. The plaintiff was a trust, managing the legacy of Randy California: its leader Michael Skidmore took advantage of recent amendments to U.S. law that allow to prove the similarity of the songs not on the basis of the main melody (as before), and on “common sense and ideas”. Skidmore claims that Jimmy page loved us and personally asked Randy to teach him how to play this song on guitar. According to Skidmore, this happened in 1969, a year before writing “Stairway to Heaven”. The plaintiff does not seek compensation (only a symbolic dollar), but insists that the CA should become the official co-wrote the song, and then his heirs can receive royalties (royalties) for composition. Royalties in all previous years of the existence of the song (this amount is estimated at half a billion dollars) it’s not a concern.

Led Zeppelin, according to the plaintiff, stole the Intro to “Taurus”. In fact, it concerns the first bars of “Stairway to Heaven”, in which Jimmy page plays a chord in a minor on the background of the chromatic bass line La/La flat/salt/ salt flat/FA. It is extremely common in music, the technique used by composers for hundreds of years. Something similar can be heard in early Beatles songs “Michelle” and “While My Guitar Gently Weeps” written to “Taurus” and many other compositions. In addition to the entry “Taurus” and “Stairway To Heaven” very little in common: the songs otherwise develop harmoniously and not similar in structure, they have a common melody.

Led Zeppelin allegations of plagiarism categorically reject. Lawyers for page and plant say that the riff at the beginning of “Stairway To Heaven” was used by musicians around the world for centuries, it is too common to someone to hold, and is a basic musical element. No one denies that it is almost identical to a piece from “Taurus,” but such coincidences to happen in music constantly. No one comes to mind to sue for the same sequence of chords or popular techniques are limited. The main task of lawyers Led Zeppelin to convince a jury. Musicians already have helped the court. According to the judgment, the plaintiffs will not be possible to mention other cases of plagiarism in songs of Led Zeppelin (and they were many), and how much drugs and alcohol had consumed page and plant in the early 1970s.