Home / Photo report / The lives of the children of the Spanish immigrants, forcibly detained in the USSR. Photo

The lives of the children of the Spanish immigrants, forcibly detained in the USSR. Photo 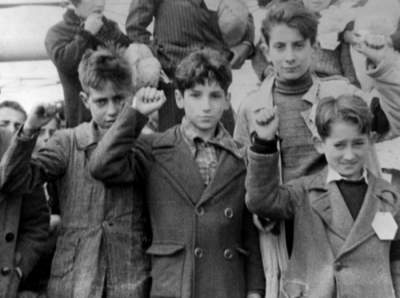 In the USSR evacuated 3,5 thousand children.

On 23 June 1937 in the Soviet Union there has arrived a steamship “Santay” with a group of Spanish children from the families of Republicans who are out of the country during the Civil war. Just in a different country from Spain then sent 32 thousand children, of which 3.5 thousand – in the Soviet Union. After the war, in 1939, all other countries returned to their homeland, but those who were in the Union, was not released until the 1950s.

Why Spanish children held in the USSR and how they lived in a foreign land? Their parents saw no other way out – it seemed that the only way they can save the lives of their kids. They hoped that the separation will be short, no one suspected that those who left the USSR homecoming will be possible not earlier than in 20 years, and some not at all. In most countries that host Spanish children immigrants, they were distributed to families in the Soviet Union was created for them homes. In 1938 he established 15 children’s homes: Moscow, Leningrad, Kiev, Kharkov, Kherson, Odessa and Yalta. While before the war the conditions of detention of children in such boarding schools were much better than in ordinary children’s homes – the government cared about the prestige of the country. Standards of maintenance per pupil was 2.5-3 times higher than in other boarding schools, summer children with poor health were taken in the Crimean summer camp, including in “Artek”. However, to adapt to the Spanish children in the Soviet children’s homes was much more difficult than in other countries. Much attention here was paid to ideological education, regularly conducted politicide and workshops on familiarization with the Foundation of the Soviet system, the tasks and work of the CPSU (b)”. Propaganda worked effectively – as a result, the children wrote enthusiastic letters to the media. In magazine “the youth international” in 1938 published a letter Rose, Vibrato: “We were on red square and saw how beautiful was the Red Army, as many were working, how everyone is welcomed, comrade Stalin. We also shouted: “Viva Stalin!”. 12-year-old Francisco Molina admitted: “Only in the Soviet Union I was in school: my father, a farmer, could not pay for the teaching. I don’t know how to thank the Soviet people for the fact that I was given the opportunity to learn! I want to convey thank you dear comrade Stalin, whom I love very much”. In 1939 the Civil war in Spain ended, and the majority of children returned from other countries to their homeland. But the Soviet leadership said that “I will not give children into the hands of predatory Franco regime”. The right choice from the Spaniards was not, they were denied the opportunity to leave the Soviet Union, explaining that at home they are waiting for repressions by the ruling regime of General Franco. In the same year, a Spanish teacher was declared socially dangerous, accused of Trotskyism and arrested. In 1941 the Great Patriotic war, all the hardships which the Spaniards had to endure on a par with Soviet children. Reached military age were sent to the front. It was explained this way: “the young people of Spain must be in the same terms as Soviet. And she, coming directly from the children’s homes without a connection to the people, remains a neglected and decaying… And in the army, they all become hardened and persistent… and so we’ll save the Spanish youth”. 207 of the Spaniards were killed during the battles, another 215 people have died from hunger, typhus and tuberculosis. During the war, orphanages were evacuated, and children were taken to the Urals, Central Siberia, and Central Asia. In military terms, the Spanish children, as well as Soviet, had to live from hand to mouth, in unheated areas. Accustomed to another climate, many children did not survive the local cold. From evacuation and returned about 2000 children. Upon reaching adulthood many of them had to accept the Soviet citizenship, as the Spaniards living in the USSR was every 3 months to report to the police and were not allowed to travel outside the region.

See also: the Lives of immigrants from the Soviet Union in new York. Photo

The surviving Spaniards an opportunity to return home presented itself only after Stalin’s death, in 1956-1957. Some chose to remain in the USSR because by the time I managed to start families, some did not accept at home: the Franco regime prevented the arrival in the country of adults who have received training under the Communist regime. Only 3.5 thousand returned only 1.5 thousand, upwards of a thousand died.