The first week of the UEFA Cup: arrested 323 people 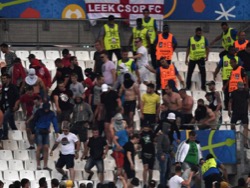 French police arrested more than 320 people since the start of the European championship on football. About it reports TV channel FranceTV Info with reference to the Ministry of the interior.

In just a week the guards had to detain 323 people, 196 of them are still in custody, 8 sentenced to various terms of imprisonment, 3 – conditionally. Another 24 people, the court decided to deport from the country.

The riots began with the arrival of English fans in Marseille. Even before the official start of the season they were looking around the city for supporters of the terrorist group “Islamic state”, saying, “ISIS, where are you?” To disperse them the police were forced to use tear gas. On 10 June, when the first game of the tournament, in one of the bars of British fans staged a fight with Russian fans.

Passions reached their peak on the day of the meeting of national teams of Russia and England ended in a draw. After the game a fight broke out right at the stadium, and this despite the fact that local law enforcement had expected such a development.

Clashes continued and in Lille, where Russia played against Slovakia (1:2). And again in the riots were involved the British. According to some, they provoked the Russians. Ahead of the match Angia-Wales, but it will be no surprise if British fans fighting with our fans.