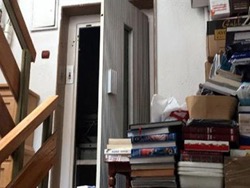 Firefighters found in the Elevator of one of the apartment buildings in the Marmara region of Turkey, the man’s body, which lay there for almost a month. On Tuesday, June 21, Hurriyet Daily News reported.

The body of 61-year-old Mustafa Ahmet Akdogan managed to detect only when the owners located on the first floor of the grocery store complained about the smell of decay. They thought that it was coming from the apartment.

Firefighters opened the housing and discovered, but determined that the smell comes from the Elevator. They entered the mine and saw the lift that got stuck between the fifth and sixth floors. It was discovered the deceased. According to experts, the body lay there for at least 25 days.

The publication said that the deceased lived alone, so stuck Elevator without anyone knowing. He also had no mobile phone, and the loud cry did not allow the condition. According to Hurriyet Daily News, he suffered from mental illness, once in 1999 was lost during the earthquake the whole family.