The atmosphere of Mars was once full of oxygen – NASA 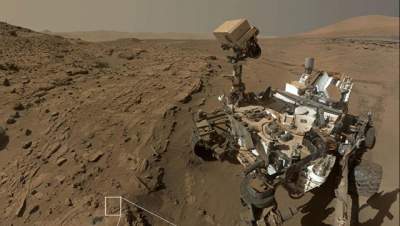 NASA scientists have found new evidence that in the past Mars resembled Earth.

The Rover Curiosity found in one of the rocks on Mars traces of oxides of manganese, indicating that in the distant past the atmosphere contained much more oxygen than today, says the article, published in the journal Geophysical Research Letters.

Lanza and other members of the science team for the Mars Rover Curiosity made this discovery by studying data collected by NASA’s Rover after the laser barrage of stones, was found at one of the stops of the device in a place called Windjana in mid-2014.

The ChemCam instrument, which includes a laser gun, shells of the studied rock samples using laser pulses vaporize a part of them and studying facilities, defining their composition and properties. In the case of stones from Windjana, their spectrum contained traces of compounds of manganese and oxygen in their breeds.

This discovery was a big surprise to scientists on Earth the first major deposits of manganese species was formed only after the primary ocean of the planet appeared photosynthetic organisms that saturate the atmosphere with oxygen and allowed the oxides of manganese formed.

The question arises, how do we get on Mars, oxygen, if we do not consider that on its surface there was life. As suggested by Lanza, large reserves of oxygen on Mars occurred at a time when its core started to freeze, the magnetic field began to weaken.

At this time, solar wind and cosmic rays began to interact with the water molecules in the upper atmosphere of Mars, decomposing them into hydrogen and oxygen. The lighter hydrogen will immediately escape in the interplanetary medium, and the oxygen remained in the atmosphere of Mars. Over time, a significant portion of the water evaporating from the oceans of the red planet in space, was converted into oxygen, which could be enough for the formation of manganese rocks.

The discovery of oxygen on ancient Mars, explains Lanza, does not necessarily indicate that its surface was life – on the contrary, his presence is rather a Testament to the fact that this “element of life” can appear in large quantities on other planets, non-biological way. This greatly complicates the search for life beyond Earth, scientists conclude.