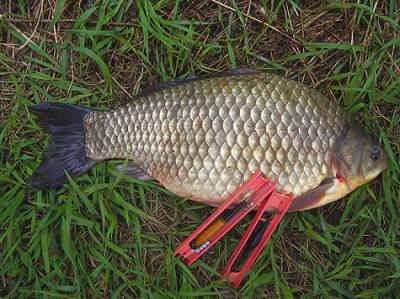 In addition to catching carp living in ponds and lakes, our anglers are already not the first year hunting for carp, which comes in the tributaries of the Volga. We can assume that the descendants of Amur carp, which in the sixties was aklimatizirovalis in the European part of Russia, Belarus, Moldova. Over time, apparently, has created very favorable conditions for reproduction and growth, as a result, the population of carp in the Volga river basin has increased manifold.

Despite the fact that in appearance the Amur carp is very similar to silver carp living in large areas of Europe and Asia, it represents a completely different form. It is a freshwater fish adapted to the reproduction in additional reservoirs. Amur carp is able to create and support a much higher abundance and biomass than indigenous forms of silver carp. Grass carp are characterized by the variability of the flood regime, significant fluctuations in water level. Carp have adapted to the flooding of large areas with emergent vegetation. When surges wind producers come in flooded places and spawn in the resulting puddles and lakes. For the Amur carp generally characterized by a tendency to leave a water stream and to penetrate in the paranasal. After the withdrawal or release of water part of fingerlings remains in the recesses of the bottom, where it then hibernates.

Spring course carp is different from the stroke of roach or IDE, when these fish rise in the upper reaches of the tributaries and a few dozen hours going back to the native reservoir. Carp is not “washed”, and in search of spawning grounds. The suburban move carp usually starts at the beginning of may and, coincidentally or not, almost coincides with the beginning of activity of pond fish.

Tactics search in General does not differ from the tactics of behavior of the angler during the running of the roaches in small rivers. Carp also comes in dense schools, moving very fast, so the speed transient and the duration lasts no more than a week. Unlike fishing for roach, there are a few features that are worth paying attention to.

In small rivers, whose shores are overgrown with bushes and trees, and where the fishers are not too much concerned about the fish, the flock rises in the direction of the main flow, not expending energy for nothing, hugging the coast. Experienced angler such places intuitively determines, according to experience gained.

Often, but not always, the path of motion coincides with the upper edge of the channel, which, however, is typical for large rivers. On small rivers the route may be on the border overhanging the water and the trees. Such a path is typical for small meandering rivers flowing into the high banks.

As you move up, the herd carp is divided and diverges along the tributaries, but the primary school remains, and it is this part of the fish reaches the highest point of the climb. The highest point of the stroke varies from year to year depending on water level. Throughout the route the crucian carp remains active and biting.

Because fishing conditions can be very diverse, in each case, it is possible to effectively catch one of the selected ways, and who likes what as far as the situation allows: “poludecu”, clearomizer with a fishing rod, a socket or feeder. In most cases Moscow anglers use bottom gear, and only in the upper areas where the carp stops for a few days, use a float snap-in.

The fish reacts to the bait, so a good bottom any outfit, while its options may be different. Catching in tight spaces, when it is not easy to find a place on shore free from bushes hard enough. Besides, there is no guarantee that the fish is fit or, therefore, highly likely, will have to try to catch and move the fish or meet her stroke. To move with a float rod is inconvenient and troublesome. Very mobile angler with the “summer” of the jig.

The only place in the suburbs, where carp has been appearing consistently from year to year, it is well known, and it is located on the canal. Moscow. Here you can sit and wait as long as necessary. Carp sooner or later will do. In rivers and streams the fish have to look for, and this is no help, since the local fishermen to share information will not.

Water turbidity has an impact on the intensity of the bite, but not as much as when fishing roach or IDE. Apparently, the effect and action of the bait, and smell carp. But despite the fact that the fish responds to the bait and quickly finds fragrant worm on the hook, she has a jet and reluctantly leaves her. Therefore, to lure and bait feeding should be exactly under the nose of the fish. In such conditions, in addition to feeder, very efficient plug, and the plug is good because it allows short-circuited to restrain the stubborn resistance of a strong fish.

You can use the centrifugal fishing rod and catch poludenko. Float on the water or lies, or hangs in the air. Sinker on the snap-in can be distributed in different ways. The simplest arrangement of shipping is that you put on the bottom of the herdsman, which is five to twenty inches from the hook, and above the herdsman attaches the main sinker. Often on the bottom and put the basic sliding sinker. These snap-ins are used on a fairly strong current, at a little distance and when fishing for large carp bait. If the flow is smooth without turbulence and without a return of the jets, it is possible to use a snap with distributed weights, from which several lower lying on the ground. These apparatus are very sensitive to the bites. Here are just a length of fishing line should be two to three times the depth. Often enough the rod length of 3 meters.

When fishing, most importantly, to achieve such a state snap when the bait lies on the bottom, and the hanging weight of the float balances the force of the water pressure on the line. If you change the place of fishing, and for another, the float moves above or below. The distance from the rod tip to the float can reach the meter. Bite marked by trembling, twitching or float on the line tension.

As the bait is better suited balls of clay with chopped worm, meal, steamed. To lure makes sense only after the encampment or trail-running fish. Otherwise, the consumption of bait will be unreasonably large. Bait can keep the carp on a point of fishing for a long time. Some anglers, and I among them, have moved from prudence to the plug, which allows you to accurately keep the lure at the point of bites. Moreover, the sensitivity of snap to the bites is achieved not by reducing the weight of the tooling, and due to the very precise balance adjustment a snap. However, the sensitivity of the snap when fishing for carp chassis is not as critical as its resistance. I advise you to take a heavy snap (3-5 g) with a simple distribution shipping and stable float. Float or floating antenna, or no antenna, with a slim upper body with one point of attachment to the fishing line. Float with one point practically does not collect on itself floating on the surface “trash”.

Often there is no sense to throw the bait far from shore. But not less often carp are wary to approach the shore, what reason is the cluster of anglers. In this case, the feeder is preferable. In the course of the bite, which are expressed in the twitching of the rod tip, perfectly visible, even better than when the indicator is a float.
As bait most commonly used worm maggot and worm with a caddis worm. Bloodworms are interested in carp a lot less, but when careful Kleve beam bloodworms is not superfluous.
The main difference between the carp that need a durable high-quality tackle on a strong current and large smelly bait in muddy water, because the fish size is two and even three pounds.