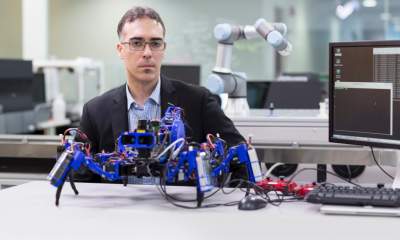 Robot spiders can make their own decisions, to communicate with each other and work as a team.

Siemens has created a new generation of robots, which can lead to a new industrial revolution.

The theme of the uprising of the machines for many years haunted Hollywood filmmakers. And while the audience relaxed, eating popcorn, watching intelligent robots erased from the face of the Earth, humanity, fantasy is gradually becoming reality.

Siemens creates an army of robotic spiders to replace the obsolete man and machines. They look like spiders and separately, can only perform small tasks, but a flock of such robots are quite capable to create the aircraft fuselage or automobile body

At the technology centre of a German company in Princeton, new Jersey created multiple prototypes, dubbed SiSpis from Siemens Spiders (Spiders Siemens). In fact, this small 3D printers for the manufacture of parts in industrial production.

“Spiders” are equipped with cameras and laser scanners. With their help, they can navigate in space and to clearly understand the boundaries of their operating site. It’s a necessary skill, because Siemens wants robots worked together.

Individually, each SiSpis performs only a small job, but working as a team, they can create quite complex structures such as car bodies, ship hulls and aircraft fuselages.

Spiders can follow the charge own batteries. Two hours later, when it is exhausted, the robot goes to recharge, skirting encountered along the way. Before that, he charged to warn his “colleague”, so he switched it.

SiSpis can be reprogrammed to perform different tasks. Consequently, the factory, equipped with spiders, it is easier to switch to new production tasks.

“Of course, we see their application in reconfigurable factory with more versatile production machines, capable of Autonomous performance of tasks”, – said the head of research Department, technology center Siemens Livio Dallara, adding that this is not the final version SiSpis.