Home / Business / Russia caught up with the obesity USA

Russia caught up with the obesity USA 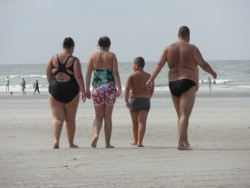 Russia on the prevalence of obesity has caught up with the United States, said chief freelance specialist of Ministry of health Sergey Fighters.

“In the West, especially in North America, a lot of people with obesity, but we caught up with the prevalence of obesity United States,” writes Forbes, citing a quote of a physician TASS.

Over the last 20 years obesity has ceased to be an abstract problem for Russia, stressed Soldiers. The proportion of men with overweight during this time has more than doubled, now obesity in both sexes is about the same.

Modern medicine treats obesity as a chronic metabolic disease that occurs at any age. It is characterized by excessive body weight due to excessive accumulation of adipose tissue. This disease also leads to increased mortality.

According to the Food and agriculture organization of the United Nations, obesity is most common in Mexico, where 32.8% of the population has problems with obesity. USA, who are in second place, behind by only one percentage point.

Obesity is becoming a serious problem for the global economy, it costs all countries of the world in 2 billion dollars a year, or 2.8% of GDP, estimated by McKinsey in 2014. Smoking and armed conflict was only slightly more expensive, whereas excessive alcohol consumption costs the global economy $ 1.4 trillion in revenue per year.