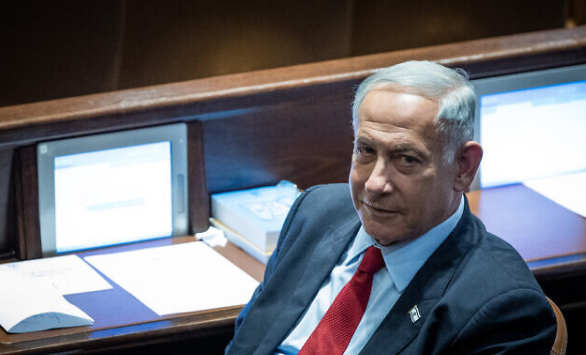 Despite snags in coalition talks, Netanyahu reportedly wants to quickly replace Knesset speaker and pass laws that would allow Deri to be a minister and police to be under Ben Gvir

Expected incoming prime minister Benjamin Netanyahu’s Likud party is reportedly planning a controversial legislative blitz as early as next week to enable it to fulfill promises it has made to political allies, while it gears up to ask President Isaac Herzog for an extension of the current December 11 deadline for forming a government.

Netanyahu originally aimed to quickly seal a series of coalition deals with his far-right and religious allies, with whom he won a convincing 64-strong majority in the 120-member Knesset in elections earlier this month.

But that has proved elusive and time-consuming due to ambitious and often conflicting demands by the various parties, with concessions made to one partner leading to others stiffening their demands.

Expected incoming prime minister Benjamin Netanyahu’s Likud party is reportedly planning a controversial legislative blitz as early as next week to enable it to fulfill promises it has made to political allies, while it gears up to ask President Isaac Herzog for an extension of the current December 11 deadline for forming a government.

Netanyahu originally aimed to quickly seal a series of coalition deals with his far-right and religious allies, with whom he won a convincing 64-strong majority in the 120-member Knesset in elections earlier this month.

But that has proved elusive and time-consuming due to ambitious and often conflicting demands by the various parties, with concessions made to one partner leading to others stiffening their demands.

One of the main legal hurdles facing the nascent coalition is that Shas party leader Aryeh Deri, meant to serve in key ministerial roles in the next government, is currently barred from serving as a minister due to a tax offense conviction from earlier this year that carries a suspended sentence.

People who have been sentenced to prison sentences are barred from being government ministers for seven years, unless there is a judicial decision that the conviction doesn’t carry “moral turpitude.”

The new coalition can ask the Central Elections Committee head — a Supreme Court justice — to rule on the matter, but Netanyahu is reportedly aiming to sidestep the matter entirely by rapidly passing an amendment to Israel’s quasi-constitutional Basic Law that would allow those convicted of suspended sentences to serve as ministers.

Any appointment of Deri as a minister would likely be petitioned to the High Court of Justice, since Deri’s conviction came as part of a plea deal that significantly reduced his punishment due to the judge being convinced he was stepping down from politics — which Deri has not done.

Deri served two years in prison in 2000-2002 over another conviction of bribery while he served as interior minister.

Another law Netanyahu wants to quickly pass would subordinate the Israel Police to the government. This is needed to meet a demand by extremist Otzma Yehudit party leader Itamar Ben Gvir, who has reached a deal with Likud that would make him national security minister, a new post in charge of police that will have more expanded authorities than the current Public Security Ministry. Currently, the law states that the police force sets its own policies.

According to various Hebrew media reports Tuesday, Likud wants to pass the laws — dubbed the Deri law and the Ben Gvir law — before the government is sworn in, preferably as early as next week. That would require convening the Knesset and replacing its speaker to gain control of the legislative agenda.

There have been reports saying Netanyahu intends to appoint his confidant, Likud MK Yariv Levin, as temporary Knesset speaker to replace Yesh Atid’s Mickey Levy of the outgoing government, with Levin later resigning and being appointed a senior minister.

But the Kan public broadcaster reported that Netanyahu could end up skipping that stage and tapping a permanent speaker immediately. It said the leading candidates for the role are Likud MKs Yoav Kisch, Ofir Akunis and Amir Ohana.

According to the reports — none of which cited sources but which appeared to be based on briefings by Likud — the new speaker could be sworn in as early as Monday, with the Deri and Ben Gvir laws passed later in the week, and the government being sworn in on December 12.

Even according to that ambitious timeline, Netanyahu would have to ask Herzog for an extension of his mandate to form a government. The four-week mandate expires on December 11, but Herzog can extend it by up to two additional weeks.

The most immediate hurdle to the plan is a refusal by the United Torah Judaism party to support the replacement of the Knesset speaker, with the party accusing Likud of going back on promises it had made in coalition negotiations. UTJ is reportedly supposed to get the Ministry of Jerusalem, but the Haredi party says it has been drained of many of its powers and of its entire budget, which has been moved to the Heritage Ministry set to go to Otzma Yehudit.

On Wednesday, the Hamevaser newspaper, which serves as a mouthpiece for Agudat Yisrael, the Hasidic faction within UTJ, published a direct attack on Likud, accusing Netanyahu’s party of being unfair and stalling on the negotiations.

Likud hasn’t inked full coalition deals with any of the parties. But it has reached partial agreements — dealing with appointments and portfolios — with Otzma Yehudit and with the ultra-conservative, anti-LGBT, one-lawmaker Noam party.

Deals are yet to be sealed with Shas, UTJ and Bezalel Smotrich’s far-right Religious Zionism, though significant progress has been reported with the latter.

Another controversial plan by the incoming coalition is to pass far-reaching judicial reforms, including legislation that would allow the Knesset to override High Court rulings — reinstating legislation struck down by the top court — with a simple 61-strong majority.

Outgoing Justice Minister Gideon Sa’ar — himself a longtime proponent of judicial reform — warned Tuesday that the plan goes too far and would mean the end of “Israel as we know it.”

“A country where the political echelon can also completely control the choice of judges and can also overturn any judicial decision is not the State of Israel as we know it,” Sa’ar told a conference at Reichman University.

“There can’t be a Western democracy without judicial oversight over parliamentary legislation,” he said. “I think that the coalition that is coming together is taking Israel to a dangerous place.”

Meanwhile, Likud MK David Amsalem — who has said he won’t agree to take any other ministerial post except justice minister — has reportedly filed some 20 law bills on judicial matters, with one of them proposing to expand the Supreme Court from the current 15 justices to 18.

According to Channel 12 news, Amsalem has explained his bill by citing the heavy workload on the justices, but devoted most of his explanation to the need to diversify the court — namely, appointing more conservative justices.

The report said that if he is not appointed justice minister — as seems increasingly likely due to Netanyahu’s tendency to sideline MKs who give him public ultimatums — Amsalem will remain a lawmaker and “challenge” the justice minister with his plan.