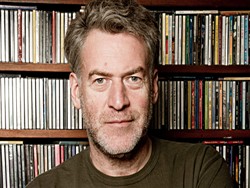 Recently I published a book — first in Finland, then in Estonia. In Finnish and Estonian, respectively. Called “Russian Karmageddon”. This is a compilation of my articles, blogs and live broadcasts for 2010-2015; you can find them on the Internet. But a few of the lyrics I wrote specially for book publication, including this, the introductory. He’s weird. But it is important. In Russia, this book may not ever come out, and I thought that there are people who would be interested with the described events to see. Just in case I inform that in the text there is no word of fiction.

What can cause a normal person to open fire on bystanders or jumping out of the window of a multistory building? Abject despair and hopelessness. What can make a relaxed agnostic, like me, to remember the Higher Power and seek divine participation? Probably, similar feelings, although the range of Light. Start with a joke. I heard it in the mid-90s, and retold with the characters of the time.

“After long talks with the man upstairs, the Lord God has agreed to accept three presidents of the earth — assuming that everyone will ask him only one question. The first went for an audience with bill Clinton: “Mr. God, You know, America is the most powerful country in the world. But we have problems: health, education, illegal immigrants… I would like to know when we will be able to solve them?” God answered Clinton: “after 20 years, my son, not before!” And bill Clinton cried: “what a shame, so it will not be during my presidency!” The following came to God Jacques Chirac: “Monsieur Lord, I’m dying to know — when my beloved France will overcome economic difficulties, racial problem, and finally live happily?” God said Chirac: “my Son, what you wish will happen only after 50 years.” And Jacques Chirac wept bitterly: “what a pity — I was by this time already be dead!” Finally went Boris Yeltsin: “Lord God, I, like my colleagues, I would like to know when my country, Russia, will live a normal life, and then we have problems, too — Chechnya, you know, corruption, demography!” … And God wept.”

Fortunately, the Gods do not only cry.

Here I turn to the exciting part of the story. I have a close friend, an American, long living in India. He sold his business, gave about one hundred million dollars for good causes, and is engaged exclusively in spiritual practice, communicating with the Holy people. For several decades, was a pupil and confidant of SAI Baba. (Who is SAI Baba — look online if you don’t know). About an event that I will describe below, he told me more than once. Of course, without notes and records. But luckily, recently I found a text transcript of one of his lectures given on March 3, 1992. A small piece of it just tells the story of this strange and amazing instrument. I quote it in its entirety.

“SAI Baba raised Mrs. Kristal and me to a level that he called “the tapestry level” from which he showed us the whole planet Earth, with its many dimensions, as if layered on top of each other. He showed us a mental form (thought form), spread over the country: these thoughts merged together in a huge giant something right the beast (beast). It was like a big black cloud resin, in which a seething mass of energy inside the lightning flashing and the like; very aggressive (violent) sort of thing. He forced us to approach her, and very carefully. We even wrapped some blankets. And he said, “This is a mental form that controls Russia.” It was four years ago. He said that this mental form is created from human thoughts about fear of severe punishment (fear of extreme punishment), and that the people there are under pressure of this fear for a thousand years. Long before kings. And he said, “but This mental form must be destroyed”. And another said, “Only human beings have the power to destroy these forms, because that’s what human beings themselves have created them with their thoughts”.

“He then caused these divine creatures… I can’t tell you more, but this is a great mercy that he showed them to me… these amazing heavenly hosts (hosts), under different circumstances… (In conversations with me, my friend said that it was the sort of angels — A. T.) One of them stepped forward, and had with him the needle — nothing else I can say… SAI Baba said, “This form cannot be destroyed instantly; I’ll show you what to do.” And he took us around this something, which covered the entire country of Russia, and we stuck a needle in him… He said — “here!” and we pierced a hole in this thing. Then led to the next point: “over Here!” It took us six hours, along with meditation — although in those dimensions time does not exist. We walked the whole form around and, I think, did it in 150-200 holes. SAI Baba said, “Now the energy will flow from this mental shape, and in doing so, people will become freer”. It was four years ago.”

So, the procedure of karmic correction Russia and squeezing her out of the dark energy of fear and slavery took place somewhere in early 1988. Now you know why so famously drove perestroika and glasnost, why failed coup in August 1991. What’s next?

All participants in religious rites over huge, but crushed the evil fate of the country is more or less alive. Phyllis krystal, the world’s most famous Yogini and meditation master, living mainly in Switzerland; teaches classes and writes books. Most recently, she was 101 years old. I had the good fortune to chat with her in London in the 90-ies; she confirmed what was discussed above. My friend (whose name I somehow do not want to disclose, although it is quite widely known) lives in the Ashram, sometimes travelling and is in constant contact with SAI Baba. SAI Baba, who cured away from cancer and my mom made some more wonders in my eyes, died 24 April 2011. His bodily reincarnation is expected in a few years, and while he is in a state of light body — whether “easy”, or “light” body. What is it, and how my friend communicates with him, I don’t know. But definitely communicating, as sometimes sends this report.

Get back to earth. The problem is that the Gods and Mages, apparently, forgotten our poor country, long ago and no it didn’t work. But the hole-1988, apparently, already been choked off new fears. Otherwise, how to understand the darkness that is now going on in Russia? That’s the way it is now going, and plusits… Very interesting words about that black cloud of hatred and terror, created by us, and only we, the people, and not angels with their sacred eagle, to be able to dispel. As much as I wanted to volunteer to fly in the right dimension and light to stick a needle into the heart of this dark brute, tormenting my country! To vanished the generated chimeras and vampires, fear and anger, leaned the bonds of karma and despair. And there was one small white cloud.

So I see the most realistic method of transformation and revival of Russia.