Home / Society / Karl Marx: from the beginning, without slander and distortion. Part 2

Karl Marx: from the beginning, without slander and distortion. Part 2 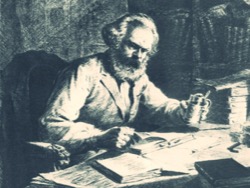 Digression to the question “why so many letters”, “too primitive” and “nobody will read it, but who cares – he himself will understand perfectly”. Perhaps you will understand. But what about those who are all 50 volumes of PSS reading once did, and “intuitively” – does not work? And who then still believe: those who claim that Marx says “all kill”, or those who claim that Marx promised a Paradise on earth as early as 1901, and since heaven has not come, then he is lying? Word for anyone, you do not need to know.

That’s why I propose to trace how the Marxism that came from, and what comes out of it.

Many letters in the last article came down to the fact that we learned that society is divided into the exploited class and the exploiting class. Question: how then suddenly took some kind of “bourgeoisie”, and why?

The fact that this is a different classification on other grounds and for other purposes.

From history we see that the society is undergoing some changes (and some happen relatively quickly and, say, acute), affecting at the same time as the social and economic conditions and production process.

For example, instead of subsistence farming, when all you need is produced in the estate of the feudal Lord, the people, are required to give a specified quantity of products in kind for what are in the land of the feudal Lord, and is purchased mainly weapons and luxury items, there are farms producing agricultural products, manufactures, and then large-scale industrial production in cities, which employ free wage workers performing individual operations, and not owning the finished product at all.

With the growth and development of manufactories and industrial enterprises, a feudal Lord with his military detachment in the picture of history fades somewhere into the background and eventually ceases to exist, and appears the owner of the company, whose interests are protected by the state.
That is, with the growth of financial and industrial power of the new owners, the ruling becomes a different class, as the old feudal couldn’t hold on to their power. Why did this happen, what is the weakness of the old and the new? What are the signs by which to distinguish between the old ruling class and the new? And finally, what is the weakness of this new ?

Several looking ahead and “sideways”, I want to remind you that there are signs of necessary and sufficient. That is, if we found before us the subject of one essential characteristic, then perhaps that’s exactly what we think. But maybe just something similar. If the required feature is not found – this is definitely something else. Finding the symptom of the necessary and sufficient exactly what it is, and it has all the features that you need.

Marx in his works relies on the concept of work. Religion, for example, having considered its historical evolution, Marx believed human error and the opium of the people. Dealer in opium Marx believed the ruling class. Indeed, all revolutions was preceded by a change of attitude in society to the current religion, and sometimes she even reformed under the purpose of the coming revolution. To summarize, if the company has changed the employment relationship has changed and the role of religion. Under capitalism, religion receded into the background. Therefore, if we are not interested in the details of all those methods by which the bourgeoisie took power from the feudal lords, it is enough to trace exactly the changes work.

Here we have a new concept of “productive forces” and “relations of production”.

The exact definition of the term “productive forces” gave Stalin:

Over time, the amount of knowledge increases, technology and tools become more complex, knowledge becomes more necessary, and this requires the improvement of industrial relations.

Industrial relations is, in fact, the relationship between people in the production process and movement of the results of work to the consumer.

To increase production efficiency requires consolidation. More efficient blast furnace of the crucible in the laboratory (and in the forge is impossible of what is done on a large steel plant, a Large dam is more efficient than heap mill wheels and submersible impellers, mechanized cultivation of the land possible on 6 acres, but will have the advantage of not fields below a certain size. Metallurgical plant and a dam to build, tools someone should make, knowledge to apply, people with the right skills need to come from somewhere.

Human capacity requires specialization. That is, the crop of potatoes will increase if to plow more land to improve its processing and harvesting (i.e. the use of more sophisticated tools), apply fertilizer. In addition, if one person digs up the earth, the other throws the tubers and digs in the same time to handle more land than if you do everything will be the same person.

Storage/processing produced product and deliver it to the consumer needs to do a third.

With the production equipment and fertilizers – a similar pattern. Manufacturer of potatoes cannot be planted/hill/collect potatoes, and dig the ore, smelt the iron, forging parts for combine harvester and collect them from the harvester, and then another, and to serve. Just physically can’t. And even just the combine to make himself can not because of the amount of work required and the lack of the necessary skills. Required agricultural enterprise, industrial enterprise, plus a number of industries in which people perform a limited number of actions that he learned.

All these people need something to feed them. If the robber wins all grown – nothing nowhere appears. Moreover, the manufacturer of potatoes is not interested to increase its production

If the level of the productive forces and production relations, labour productivity increases, respectively, increases the amount of product produced and those who managed to adapt to it, get an advantage over those who failed. What is the problem – after all, it would seem, just profitable – know yourself, improve, and get the result?

The problem is that over time the productive forces outstrip the relations of production, first the slave, then feudal, then bourgeois. But the ruling class, accustomed to live by robbery, it is not interested to change anything. He looks good, but if something changed, so it is unknown what the result is. Moreover, if you can live with the robbery, that means you need to snatch here and now, at the maximum, and then – “to think bad, from this thoughts in my head get hot”. In the end, development is replaced by destruction everywhere, where the robber is able to reach, and that attracted his attention.

And even if someone wanted to change something – there is resistance both conscious and not conscious, as other members of the ruling class, and the built system as a whole.

Example – the civil war in America, where the industrial “North”, which required manpower and the ability to sell manufactured goods that faced agrarian “South”, receiving their income from the plantations on which the slaves worked, produced and sold to the former metropolis. That is, in the interests of “North” “South” did not care, as Sever was interested in General only to “pull the blanket” on their side.

The bourgeoisie was able to solve this problem, based on the idea of “private ownership” and the idea to ascribe to money are some properties that cannot be called otherwise than absolutely mystical. But it worked. For some time.

And here I want to note that when there are discussions about “private ownership”, starting from “what it is all about” what qualities and properties it possesses, and whether it is good or bad – debate this kind of fruitless because we are not talking about private property, but only about her idea.

Because if the robbery is considered normal, what kind of ownership do you can speak? Only the ones that have not been selected yet, or one that you can try to take away. However, the idea believed, and the bourgeoisie was able to organize a constant replenishment of its ranks with new recruits, and the resources obtained from the introduction of new relations of production, and the weakness of the former ruling classes have enabled her to become the new ruling class.

What exactly is the focus, what is weakness, and that with all this you can do will be in the sequel.