Home / Photo report / It looks like the possessions of the richest man in history. Photo

It looks like the possessions of the richest man in history. Photo 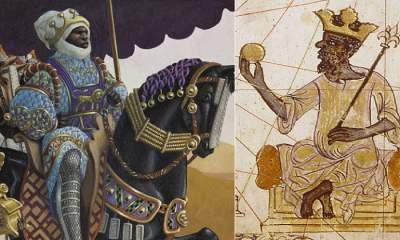 He was the ruler of the Mali Empire.

While in the XIV century Europe was shaken by civil wars, attacks of the Turks and the black plague in West Africa flourished, the Empire of Mali. The then ruler Mansa Musa had a fortune, which made him the richest man of all times and peoples. Mansa Musa became known worldwide, thanks to the Hajj (pilgrimage) to Mecca, which he made between 1324-1325. Through the desert was a caravan, consisting of 10 thousand soldiers, 30 thousand civilians, 12 thousand slaves and 500 heralds announcing the approach of the king. Of course such a huge caravan that required a lot of content, so, according to historical Chronicles, in a way Mansa Musa took more than 12,000 kg of gold and in what does not deny. Crossing the Sahara, the ruler of each day have on my Desk fresh fish and vegetables. They were brought up messengers. Besides, they were all filled with the quirks of the wife of Moses. Once Nariba condé wished to take a dip in the pool. 8700 slaves immediately began to dig the sand, and in the morning the Queen and 500 girls of her retinue were already splashing in the pool filled with water from a wineskin. The pilgrimage of Mansa Musa lasted about a year. In each city, which the Governor passed on Friday, he was ordered to build a mosque. Musa gave gold to the poor, buying goods for exorbitant prices. From this to the larger cities of Cairo, Medina and Mecca for the next 10 years, there has been the devaluation of gold. On the way back home Mansa Musa borrowed gold in large amounts and at high interest rates. This is the only case in history when one person regulate the price of gold. The primary means of replenishment of the Treasury of the state of Mali at that time was the mining of gold and salt. Fortunately, the Governor cared not only about themselves but also the welfare of its people. During his reign, Mansa Musa led the state to prosperity. Everywhere were built of the mosque was a large University library. The ruler was tolerant of those who have not converted to Islam and worshipped pagan gods. This is another important reason for the stability of the state. The rule of Mansa Musa’s called the “Golden age” of Mali. Research 2012 Mansa Musa won the first place among the 25 most wealthy people in history, ahead of Rockefeller and Rothschild. His fortune was estimated at 400 billion us dollars.
Source: http://www.kulturologia.ru/blogs/160616/30035/