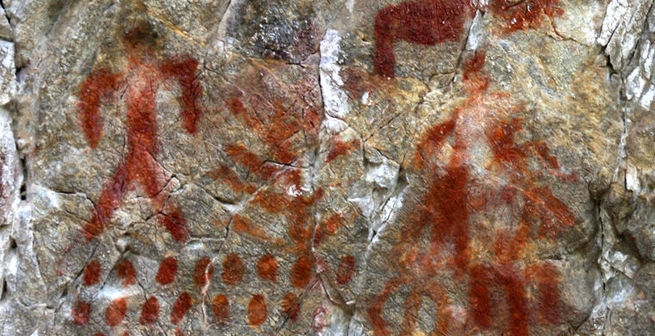 Novosibirsk archeologists reported the discovery in Transbaikalia rare rock carvings made by ancient people. Scientists suggest that the age of the petroglyph is about 4000 years.

About the petroglyphs, as they called the figures the locals on the river spotted Seals near the village of Gorbitsa Sretensky district of Zabaykalsky Krai archaeologists heard before. The people there were rumors that there is somewhere in the taiga on the rocks image made with paint. But this area is remote and difficult to access. No one gets to it professionals, the petroglyphs have not seen, yet with the help of a local resident Eugene Karelin, petroglyphs are not found by the archaeological expedition of Sergey Alkyne, associate Professor of archeology and Ethnography, Novosibirsk state University and researcher of iaet SB RAS, said in a statement on the website NSU.

“Pisanitsa on the river Largi — a site of rare. First of all, because Pisanitsa large size and contains a lot of images, while usually on the rocks in the area one to three poorly preserved drawing, ” he says. — Secondly, we were pleased with its excellent preservation. The monument was accidentally discovered years ago by a local hunter and almost never visited other people.”

The petroglyphs surveyed by archaeologists in Novosibirsk, consists of more than 20 elements. It is made with mineral paint – red and orange ocher. Painted human figures first to catch the eye. Upon closer examination, the figure can be seen the bull, the tree and, presumably, birds.

Of course, it should be understood that the interpretation of all these images is difficult. The individual elements can be interpreted in virtue of his scientific competence, archaeological and ethnographic analogies. Central in the composition are anthropomorphic images. It’s hard to say definitely who they are representing: hunters or spirits?

“In particular, on the petroglyphs in Largo, there is a figure, which shows the circle — a solar sign, Sun sign. He has in the crosshairs. So in many Siberian shamanic cultures indicate diamonds. It is therefore possible to assume that the figure with the solar sign depicts a shaman with a tambourine”, — says Sergey Alkyne. 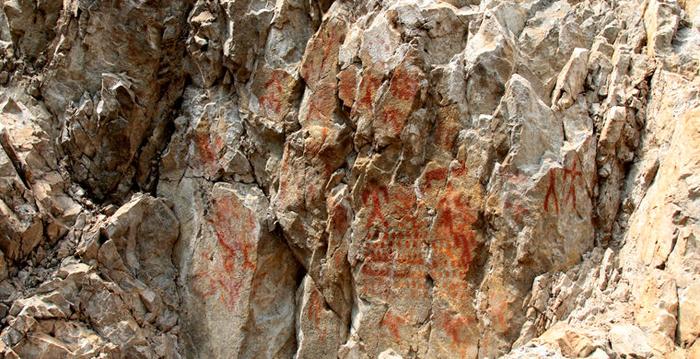 In addition, the archaeologist confidently noted in figure hoofed animal, presumably a bull. On the rock there are images of birds that are often found on other known petroglyphs in Transbaikalia. Another important element Darginskoy petroglyphs — images of multiple points and lines.

“These points are sometimes interpretiruya as the account symbol, when the author of the image recorded the number of certain objects (e.g., cattle herd). With regard to the number of vertical sticks on the horizontal line, then it is possible that this image of the long boats-canoes with people people. Anyway, so interpretiruya these drawings our colleagues in other regions, and in Transbaikalia it is the only known image” — explains the archaeologist.

The petroglyphs in the valley of the spotted seal was found by a local hunter many years ago. In the early ‘ 90s, Victoria F. Kupriyanov, a teacher from located 45 km upstream of the village of Shilka Malarky, even brought their students to the petroglyphs on a guided tour. But as time went on: the hunter left his village, was not an elderly teacher, and other locals did not know the road to the petroglyph.

“Archaeological expedition found Darginskoy the petroglyphs at the end of the field season of 2013. It was a deliberate search, and the first who saw the pictures on the hard rock, was a University lecturer Vladimir Akhmetov”, — says Sergey Alkyne.

In that year, the expedition spent at petroglyphs no more than an hour. In the next two field seasons Novosibirsk archaeologists returned to Darginskoy the petroglyphs to copy all the images on the transparencies for further analysis. Except for the student teachers they were assisted by volunteers from the Chita railway College.

“We now have a full copy of which may be: to study the image, to analyze the plot. On the one hand, our task is to tell everyone about this amazing petroglyph, introduce new archaeological monument in the scientific revolution, to bring to his study of other professionals. On the other hand, like the petroglyphs and remains intact: let it not be marks and images of tourists”, — says the scientist. That is why archaeologists for several years, that took work to produce a copy, do not rush to tell reporters about his discovery. However, still deaf remote area protect the petroglyphs from outsiders.

According to preliminary estimates, Leginska Pisanitsa was created in the bronze age, about 4,000 years ago. Such a conclusion, archaeologists made on the basis of comparisons with similar monuments in Eastern Transbaikalia and Yakutia. For a more accurate Dating of scientists required additional archaeological material.

“Petroglyphs — it’s not just petroglyphs. They are connected with rituals and ceremonies. Usually on the site for petroglyphs are altars, there are various tools, arrowheads, etc. But still we failed to detect traces of ritual activity at the foot of this rock with drawings”, — says Sergey Alkyne.

The lack of archaeological material directly underneath the petroglyphs does not discourage scientists. Nearby discovered other archaeological sites, including the mouth of the river Largi famous ancient Parking of hunters-fishers. According to Sergei Alkyne, discovered fragments of ceramic vessels conclusively date it to the bronze age. The scientist hopes that in the near future will be able to find out whether there is a connection between this Park and petroglyph.