Home / World / In the US Navy ship experienced an explosion

In the US Navy ship experienced an explosion 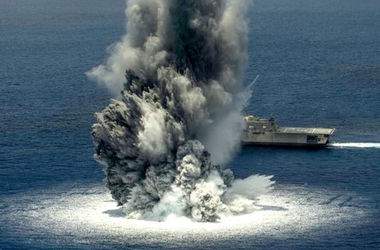 In the United States conducted tests of a new warship.

The U.S. Navy tested a ship near the sea area of the project LCS explosion, to see how he is resistant to damage, which may obtain during a real fight. As reported by N+1 with reference to Defense News, in trials involving a trimaran “Jackson” type of “independence”. The test was deemed successful.

Vehicle test was conducted off the coast of Florida. At a distance of about 90 meters from the ship, the military detonated an explosive device weighing 4.5 tons. The exact distance, type and weight of explosive is classified.

According to the military statement, the ship suffered an explosion better than expected, while receiving minor damage.

During the tests, the vehicle received damage to fixed 260 sensors located in different parts of the ship. Soon Jackson will be a minor repair, and on June 22 it will again test the resistance to explosions. July 8 will be the last test of this kind. In all cases, you will use explosive devices weighing 4.5 tons. They will blow closer to the ship.

Results of the tests on military intend to make a list of possible improvements of ship design, which will enhance its survivability in combat conditions. Detailed information about the results and necessary improvements to make public is not planned.

Trimaran “Jackson” was founded in 2011 and 2015 included in the US Navy. A ship with a length of 127.4 metres and width is 31.6 meters has a displacement of 2.3 thousand tons. It can reach speeds up to 47 knots, and the range of its course is about 4.9 thousand miles. The ship is armed with cannon caliber 57 mm, four units of 12.7 mm and launcher 11 missiles Evolved SeaRAM.