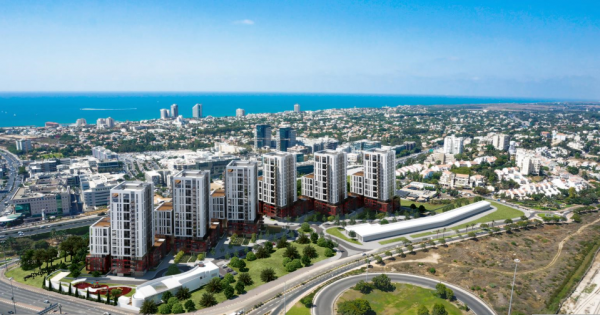 Q: the Volume of Russian investments in foreign real estate generally (in money and in sq. m). How it looks if you take the period from 2012 to 2015? What are the trends in 2016?

Concerning Israel, is not, and apparently cannot be of any specific data — either in square meters amount. There are two reasons. Most probably is that your compatriots — Russians buying real estate in Israel, in contrast to the acquisition of real estate in most other countries, are more and … of our fellow – Israelis, have Israeli citizenship and therefore statistically perceived as Israeli citizens and not as foreigners.

The second reason is that in Israel there are 3 main instances that track the dynamics of real estate prices. This is the Central Bureau of statistics, Tax office of the Ministry of Finance and the Ministry of construction. For a short period of time they do come in different vector evaluation. Clearly, if we are talking about years, they somewhere come to a common denominator, but when we are talking about a short period of time, they can give different results, because estimate, or rather, estimate, the dynamics of prices in Israeli real estate in different samples. And whether the buyers are Russians – not one of their criteria is.

No monopoly players – construction companies, real estate network, or the bar Association, which would control the whole market of buying Israeli real estate by the Russians, or the lion’s share – no, so you have to rely on intuition and speak about dynamics, not about absolute values.

Question: What objects prefer to buy our fellow – countrymen and they then have to deal with them most often: sell, rent with UK?

The Russians are buying property in Israel for two reasons. One for a personal residence during his visits to Israel, the second for investment. Sometimes both these causes are combined in a single object. This is not always the right approach, because then the search criteria can be quite different. When buying an apartment to live in, it is almost always, with two small exceptions, Eilat and Jerusalem, bought in the coastal area of tel Aviv, which in the South includes the city of Rishon LeZion and bat Yam, and on the very relative “North” – Herzliya, Netanya and Caesarea.

Objective disadvantage of buying property there in the eyes of the buyer-investor is the low current income from rents. More expensive than an apartment, the less cash flow it brings in relative terms, though larger in absolute. If we are talking about buying property purely investment aim, then to obtain a 4-5% annual gross, has to get away to the capital of Israel’s South – Beersheba, or the capital of the North of Israel – Haifa, or in a nearby city.

Despite the fact that the relative income in percentage terms is greater in absolute it is small. Accordingly, the management of such apartments that bring, say, 500-1000 dollars per month, one person will not do, and will give them into the hands of the management company. Another important cut – off point is ready to buy a flat or apartment on paper.

In Israel, there is virtually no risk of fraud when buying an apartment on paper – provided that it is buying from the Builder, not the building society, however our clients do not give to buy apartments in building cooperatives, for many reasons). Legislation and enforcement are built so that there was no such business model is to collect money from depositors, to throw them on 100% of the cost or close to it, and with the money to escape. The last such attempt, which took place more than 10 years ago, has led to a dramatic change in the law.

And today, the developer is forbidden to take more than 7% of the purchase price, except in the special trust account, which is dedicated to a specific project, and is being monitored by an Israeli Bank. And the last are famous for the conservatism and reliability. What do the Russians bought real estate – sell or rent?

The property, which was originally bought with the purpose of residence, usually do not pass. In Israel, it is two kinds of rent: long term, multiple years – one, two, three, or short travel “podena” rent in the style of air BNB. If you rent an apartment on a long lease, it is clear that to live in it during his visits to Israel impossible. You can take it for rent and thus benefit from it.

But our experience shows that most Russians grew up on the tale of Masha and the Bear and don’t want someone sleeping in their bed and eating from their bowls.

If we are talking about homes that were originally bought for investment purposes, they are leased. However, as I said, very popular sale on paper, in this case for the first few years of Russian, which Israel lives, spared from having to deal with the problems of delivery of property in rent because she just built.

Question: How long investment on average is owned by a Russian citizen?

I have a feeling that in spite of any crises, the word “selling” is completely absent in the vocabulary of Russians who buy property in Israel. If he is forced to consider it as a source of income, he will rent it out, but every twenty stories of buying an apartment has no more than one story sale.

Question:In real estate which countries prefer our people to invest three years ago – and that was interesting to the last time?

I can’t say anything about other countries, except Israel – we have a very narrow geographic specialization. About Israel we can say the following. First, Israel with a side was less interesting to Russian buyers – simply because it became more expensive for those who earns money in rubles, and forced to spend the shekels.

The ruble is very much over the years fell against the dollar, with the shekel that did not happen. On the other hand, in the last 8 years Israeli real estate shows steady, steady , steady growth without any sudden spikes and drops. During this time, the value of residential property in Israel has roughly doubled. In this case, the Israeli real estate market is regarded as a conservative, not speculative investment.

Question:And what about the price. It is known that the Russian investors initially virtually all countries have held… well, let’s correct for people uninformed. And tried to sell them two or three times more expensive (it is, of course, rarely possible) or at least inflate the price of 20-30 percent (but this was once observed very often). In your opinion, is this trend a thing of the past? Or still there are cases when the object is in Russian hands at a price that is overvalued relative to the market?

Yes, indeed, there are countries, where Russian investors and ordinary Russians are trying to sell real estate is significantly more expensive than its real market value. Is there such attempts in Israel? I suspect that may not be. We believe that with our clients this does not usually occur.

First, because builders and realtors that we work with, we are the goose that lays the Golden eggs. And if one of our clients considered themselves deceived or unhappy, we simply cease to work with these companies.

There is a second point, objective. We are not appraisers, and will never answer the question, is it worth it to buy for the proposed amount. But there is a question we can answer, or rather the information we can provide, simply because we speak Hebrew and have access to the databases. It is a question, how many exhibited for sale or have been sold a similar apartment in the same or neighboring house lately.

Before buying an apartment, we can just give our client detailed information on what apartments are on the market, what are the prices for them are requested, which amount is paid — all that we see from statements that are filed with the tax authorities and from the analytical databases. Here I foresee a smile. However, in Israel the Delta between the price stated in the financial statements with the tax authorities and the actual transaction amount is not large, if available at all.

Question: What objects abroad is possible today to name an attractive investment for our citizens? Easier: what would you recommend (if they recommend) to purchase national, which asks you whether to invest in overseas property and, if so, in which country and which object will have the greatest yield, and which reliably retain the investment?

I must admit that we do not understand real estate in Latvia, Bulgaria, America and Russia. We Israeli lawyers, so if people will buy property outside of Israel, we have from this cost-neither cold nor hot. If to speak about the Israeli real estate, the main issue is the goal. If it’s for apartment living, for the Russians, a critical factor is the minimum distance from the sea, preferably with pedestrian access and a good view is the sea.

If we are talking about investment investment, then we relatively speaking, we recommend you to split a million dollars on 4-5 different baskets, by purchasing relatively cheap in Israeli standards apartments in tel Aviv, and to lease them. The first plus is that it brings greater income. The second plus – if you need lump sum of several hundred thousand dollars, there is no need to sell a single apartment in tel Aviv for a million or two or three, you can sell one or more of the smaller apartments, leaving only part of the investment, but not all.

In addition to this approach to the Israeli real estate as just buying a ready-made flats or apartments on paper – the approach is relatively simple to implement both from a practical and from a legal point of view, there is a possibility to enter in small construction projects as investors, but this is obviously a topic for an entirely separate article.