Home / Policy / Faith in the Kerch bridge and Golden showers

Faith in the Kerch bridge and Golden showers 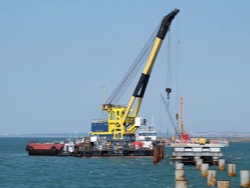 Recently one of my Crimean friends suggested that now on the Peninsula there is still space to create the business of mass electronic sales. Like, for a couple of years remaining before the opening of the Kerch bridge, you need to use a temporary leg up to tie up yourself to the maximum number of customers.

According to the logic of my interlocutor, as soon as the bridge is working, in the Crimea rushes a large network and take away local all the bread (well, or at least the biggest and most delicious piece of cake). I retorted to him that the flow of money that Russia is pouring into the Peninsula, will be steadily reduced, further narrowing the real sector of the market.

Consequently, a large wholesale and retail network of Crimea is not interested, as the region is quite poor. My counterpart began to argue that the opening of the bridge almost in the blink of an eye will transform the Peninsula, will change hands in the property market. They say the Republic has finally become perceived as a place in which to invest, for example, to build here a “summer nest”.

And suddenly it dawned on me that the #of Cremationists have one thing in common: they are all in the future see a huge Peninsula as Moscow dacha, where people come for a couple of weeks to eat barbecue, swim in the sea, look at the Kerch bridge. Then, they say, life is undeveloped, and the days will become light, serene and pleasant.

Here I could not speak.

Recently, the relevant Minister of the Russian government of the Crimea Dmitry Polonsky said that on the Peninsula there will be major mobile operators. Moreover, the official said betrayed a clear disapproval of such decisions by private companies.

Whether his will — the Minister would have been forced MTS, Beeline, MegaFon and other operators directly serve the residents of the Crimea. Can not — teach, do not want — will force. Fortunately, there are three firms-strip, through which all these operators can work with visitors “roaming”-Telekom, Krymtelekom, Sevtelecom).

But the presence of the bridge does not change the policy of private entities unless they decide to finally break through the knee, trying to support the aggressive strategy of the state.

The same can be said about the seven hundred Crimean officials, for whom Ukrainian prosecutors issued the subpoenas. Will the bridge on the ratio of these collaborators? Hardly… But this is only the first step, then all of them will block access to the West.

But if the construction of the bridge not affect the perception of specific persons, neither on the economic activity of entrepreneurs, then where does this belief in a happy future?

The point is that the world has developed a new “Crimean”, the system of international relations. Even the most repulsed the followers of the Russian world understand that this is the clinch, which means that until the territorial issue will not be removed from the interstate agenda, nothing good Republic does not expect.

This is at first a struggle with blockades seemed romantic adventure. And in the end, it turned into a very unpleasant things: the real border Kalanchak, as well as energy, water and other types of insulation.

This is the beginning Crimeans were delighted by the economic benefits. But just two years later universal “ничегосебеуменятакаяпенсиябольшая” was replaced by the winged Medvedev: “there is no Money, but you hold fast.” Such a short journey from euphoria to people’s disappointment, or rather to the recognition of this frustration by the authorities.

It is clear that without some vision of the future in such conditions to live a very uncomfortable. Consciousness need hooks like the Kerch bridge,which is associated with a physical blockade. People have a glimmer of hope that since Moscow is ready to build such a bridge, Russia here-here will discover the Peninsula, and the world will finally be convinced that Crimea is not going to sail to another Harbor.

But in practice it will be different. After all, it’s not in the presence of the bridge, and in the absence of principles. “The Crimean”, the system of international relations is a temporary balance between Russia and the West, which rests on the current military confrontation in the Donbass and the uncertain status of the Crimean Peninsula.

And until this conflict is finally and irrevocably resolved, while with Russia not sanctions are lifted, faith in the fact that the Kerch bridge can change something, — the ordinary self-deception. Crimea to anyone, this gift is not necessary, all have to pay.

As for sanctions against Russia, the conditions for their cancellation known to all. And the bridge — thing is really good. For the future, of course. And in the rest Muscovites on the Peninsula there is nothing wrong. In the future, of course. But large Russian business Republic does not need. And it won’t be here anyway. Yesterday, today and always.