Home / Sports / Euro 2016: Hungary and Iceland winner was not determined

Euro 2016: Hungary and Iceland winner was not determined 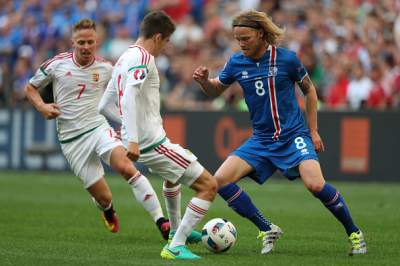 Draw at arm’s length brought a team of Bernd Storck to the playoffs of the European championship.

The Hungarians from the first minute took control of the ball – Icelanders well defended, not allowing the opponent to the shock position. Revival happened in the game after the first dangerous moment in the 31st minute király rescued his team after hitting Gudmundsson. Soon Icelanders went ahead on 39 minutes, Sigurdsson converted the penalty.

In the second half, Hungary tried to save the match. Storck fielded two strikers. Constant pressure on the goal of Icelanders has worked on the 88th minute after a sharp flank attack Severson sent the ball into his own net.

In the stoppage time, the teams could swap places – Finnbogason lacked a few centimeters to earn a penalty. Dangerous free kick Icelanders played too artlessly.

Hungary 99% made it to the playoffs, and Iceland in the final match of the group stage to beat Austria.