Erdogan expressed his desire to improve relations with Russia 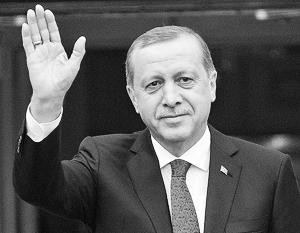 Turkish President Recep Tayyip Erdogan said he wants to improve relations with Russia, but do not know what should be the first step.

“I don’t know what the first step is expected from us. We are not a country that sits in the chair of the accused. To quarrel with Russia we do not want. On the contrary, we are a country that wants to develop relations with Russia. With Putin we were friends, and when the pilot who made a mistake, or for any other reason, sacrifice such a vast country as Turkey – it makes you wonder. I think that we need to make efforts in order to re-build relations with Russia. I wish we as soon as possible to overcome this problem,” – said Erdogan at a press conference on Tuesday, RIA “Novosti”. We will remind, Moscow has repeatedly stated that the resumption of relations with Turkey need for Ankara to first apologized for the downed aircraft, however, the Turkish leadership that stubbornly avoids.

On Monday, the Turkish foreign Minister Mevlut Cavusoglu has proposed to establish a joint working group with Russia to search for ways of normalizing relations between the two countries. The Kremlin said that the idea of Ankara will not solve the problem, this is possible only when the leadership of Turkey.

Assistant of the Russian President Yuri Ushakov said that Turkey had made “informal approaches” in terms of contacts with Russia, but no concrete steps to restore relations with Russia did not.

Relations between Russia and Turkey over the crisis after 24 Nov 2015 Turkish F-16 fighter was shot down in Syria, the Russian bomber su-24. Russian President Vladimir Putin called it a “stab in the back” by the accomplices of terrorists. 29 November last year, Putin signed a decree on the provision of national security and on economic measures against Turkey. In particular, the President instructed to introduce a ban on Charter air transportation between countries.

The Russian authorities in December announced three conditions for overcoming the crisis in relations with Turkey after the incident with su-24. As reported by the Russian Ambassador in Ankara, Andrey Karlov, the first condition are the apologies from the authorities of Turkey for the incident with the Russian su-24 bomber shot down a Turkish fighter jet on November 24. The second condition – to find those responsible and to bring to justice. Third – the payment by Turkey of compensation of Russia for the damage caused as a result of the tragedy.