English and Russian fans staged a mass slaughter in Marseille 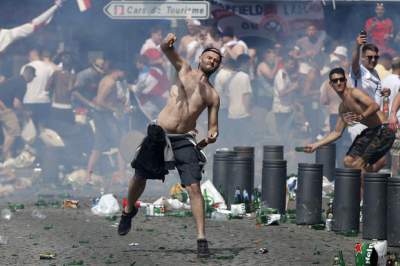 Clashes in Marseilles continuing for the third day.

Saturday in Marseille on the eve of the match Russia – England in the championship of Europe on football, clashes broke out between fans of English and Russian teams.

As marks Bi-Bi-si, for the third time in two days police had to use tear gas to pacify the fans.

Reports of riot English fans come from Marseille for the third consecutive day, but today apparently the assailants were Russians.

The Agency notes that about 20 people from a group of Russian ultras walked the streets around the old port of Marseille and lifted up the English fans. Subsequently, this developed into a fierce fight. Enraged fans threw bottles at each other every minute.

Bloody English football hooligans was carried off by the police.

Some British journalists covering Euro 2016, describing the social networks are horrific scenes that they had to see on the streets of Marseille, blame the violence by a gang of Russian hooligans who showed up at the Central square of this port city, obviously with one purpose – to make the fur fly.

In General, the fighting has been attended by about 600 people from both sides.