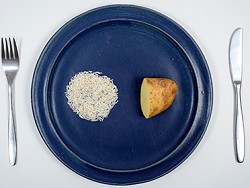 Nutritionists from the United States and Britain have debunked the myth about the benefits of frequent reception of small portions of food. Two devoted to this study published in the journal Proceedings of the Nutrition Society, briefly about them, reports the EurekAlert!

Researchers analyzed the work of colleagues, describing the impact on health of diet, associated with social, not biological, clock. In particular, professionals interested in the question of the effectiveness of the diet, suggesting the frequent use of small portions of food.

While maintaining the total daily amount of food consumed (at the level of pre-diet) increased the frequency of taking servings will not have a positive impact on the loss of excess body weight. To make improvements possible in the case of reducing the total number of calories consumed per day products.

The scientists also noted the benefit of family breakfasts, Lunches and dinners. Joint meals in this case, contribute to the formation of healthy eating habits in children. Nutritionists have acknowledged the need for lowering calorie dinner in favor of Breakfast. Meanwhile, scientists have so far refrained from final guidance that describes the daily distribution of food consumption depending on the time of its reception.