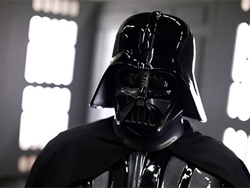 Villain Darth Vader will show in the first spin-off of “Star wars”, premiere of which is scheduled for December 2016. About it reports the edition of Entertainment Weekly, citing the makers of the film.

It is noted that Vader will appear in the film as a minor character. The action will unfold between the events of the third and fourth episodes of the Saga. To the fore will make the group of rebels, where you will find the blueprints of the first death Star before it starts to build.

In the tape played by felicity Jones, Diego Luna, Ben Mendelsohn and Alan Tudyk. In the Russian hire the film is called “the Outcast one. Star wars: Stories.

For the first time the media wrote about the possible return of Darth Vader in the series in September 2015, before the release of the force awakens.”. Will there be a villain in the next part of the trilogy, the sequel, which will be released in 2018, is still unknown.