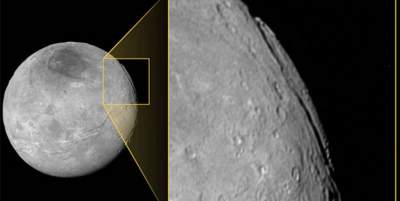 Scientists have discovered the deepest in the Solar system canyon.

NASA scientists have discovered a giant canyon, which among other things is the deepest in the Solar system.

Opening specialists made during the observation of Charon, satellite of Pluto. NASA experts noted that the canyon has a depth greater than the greatest on Earth, which is in the USA.

In length geological formation up to 700 km, and a depth of 9 km. Such scales can only be compared with the object on Miranda a depth of 5 km.

With the help of New Horizons, NASA researchers have done the canyon for a distance of 466 km from Charon. 14 Jul camera at the closest distance approached the satellite of Pluto, making it possible to obtain high-quality images of the canyon.