Audi introduced the A5 coupe-new generation Audi A5 new generation moved to the MLB platform and has grown thin for 60 pounds.

Company Audi has officially unveiled the A5 coupe new generation and its “charged” version of the S5. The novelty has replaced the platform, got a longer wheelbase and a revised engine range, and its weight decreased by 60 pounds.

The five fresh built on a modular platform MLB (with longitudinal engine layout) and shares a chassis with the Audi A4, which means the same five-link suspension front and rear. Novelty has become the second model in the lineup of the German brand, which will get a new system all-wheel drive quattro ultra, in which a Central Torsen differential is replaced by an electronically coupling.

Also, the A5 will be a new Electromechanical power system and optional “active” steering, changes the force on the steering wheel depending on the steering angle and speed of the machine. The drag coefficient is 0.25 A5 — as they say in the Audi, the best figure in the segment.

The new coupe A5 will be available with five engines to choose from: two petrol and three diesel, developing from 190 to 286 horsepower. As explained in the Audi compared to the predecessor units were 17 percent more powerful and consume 22 percent less fuel.

A six-speed “mechanics” and semidiapazonny “robot” with two clutches is proposed for most of the engines in the lineup, combined with front-wheel and all-wheel drive. Exceptions are only the top diesel “six” with a capacity of 286 and option S5, which are provided with the eight-speed automatic ZF gearbox. Both versions with automatic transmission will be available only in combination with all-wheel drive. For a fee they can enjoy an active rear differential.

“Charged” version of the S5 will get a three-liter “turbosystems” capacity of 354 forces. To “hundreds” coupe can accelerate in 4.7 seconds. Average fuel consumption will amount to 7.3 liters per hundred kilometers. 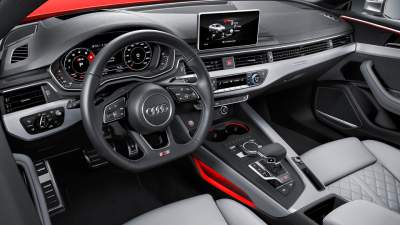 The equipment of the “five” will feature matrix led headlamps, digital instrument panel Virtual Cockpit with the 12.3-inch screen, multimedia complex of MMI with an 8.3-inch display on the centre console and touch-pad that supports Apple Car Play and Android Auto. Certain machine functions (e.g. Central locking system) can be controlled via app on your smartphone.

Surcharge will be available wireless charging for smartphones and audio system Bang&Olufsen, system of tracking the lane, the dead zones and the camera character recognition, avtoparkova, adaptive cruise control, which can independently drive a car in traffic and the access point Wi-Fi with the ability to connect to LTE networks. In addition, in Germany, the A5 will be available with a built-in SIM card providing access to the mobile traffic in Europe.

Expected in 2017, the coupe will be the most powerful and fastest RS-modification, which will complement the three-liter twin-turbo V6 with 450 horsepower.

Public premiere of “five” will be held in autumn motor show in Paris.