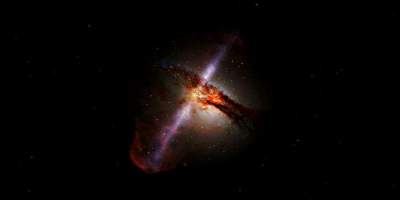 Astrophysics from the USA, Germany and Russia reported that they were able to find a candidate on an almost “naked” overmassive black hole.

When conducting a systematic search for supermassive black holes scientists have discovered the radio source B3 1715 + 425. It is at a distance of 8.5 kiloparsec from the bright nucleus of the cluster ZwCl 8193, which has redshift z = 0,1754.

It is known that the source has a very high temperature and moves with a radial speed of approximately 1860 miles per second relative to the core ZwCl 8193. Around a new candidate, scientists have noticed a significant number of star stuff.

Astrophysicists believe that this situation is connected with the destruction of the environment of a supermassive black hole that occurred due to its interaction with the nucleus ZwCl 8193. This made the space around the new object is actually free of stellar matter, which was “naked” surmesheva black hole.