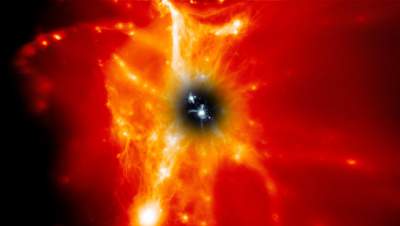 The heavy elements remain in the intergalactic medium.

Observations using the Hubble telescope and computer simulations have shown that the milky Way and other galaxies “bring litter” of the surrounding intergalactic medium, as throw there are many heavy elements and not “recycle” them in a new generation of stars, according to a paper published in the journal MNRAS.

“We used to think that almost all of these heavy elements fell into the depths of future generations of stars, where they are processed and become the basis for planetary systems. It turns out that galaxy is bad space to comply with environmental norms,” said Benjamin Oppenheimer (Oppenheimer Benjamin) from the University of Colorado at boulder (USA).

All the galaxies and their satellites surrounds not void, and the so-called interstellar medium is extremely rarefied gas, consisting, as scientists believed until recently, mainly of hydrogen with a small admixture of helium. This gas, concentrated along the invisible “umbilical cords” of dark matter is the main supplier of “star materials” for all active galaxies.

Recently scientists have found that galaxies are actively interacting with the intergalactic medium, throwing in her own ears – a giant cloud of superheated gas and dust ejected supermassive black holes at their centers. Through tens and hundreds of millions of years, these gas streams are cooled and fall back onto the galaxy, giving the opportunity to a new generation of stars to be born.

Oppenheimer and his colleagues studied this process using the UV spectrometer COS that is installed on the telescope “Hubble”. This device has allowed scientists to see that what are these “ears” of galaxies, to analyze the dynamics of the movement of gas in them and use these data to create computer models of the galaxy and its environment.

Watching the movement and concentration of the different ions of oxygen, the authors found that spiral galaxies, elliptical and their “cousins”, emit a disproportionate amount of “metals” – elements heavier than helium in the intergalactic medium.

According to the estimates of astrophysicists galaxies contain the same amount of oxygen, carbon and other heavy elements, as the surrounding clouds of hot gas in the intergalactic medium, and in some cases even less than this. This means that scientists have overestimated the ability of galaxies to recycle heavy elements and use them for the birth of new stars and planets. It’s possible that scientists today overestimate the number of planets in the Universe, building on previous understanding of the behavior of the interstellar medium.

In addition to the “trash” intergalactic medium, Oppenheimer and his colleagues made another interesting discovery – they might have been able to learn why an elliptical galaxy almost do not form new stars and, in fact, are a giant “star necropolis”.

Observing the distribution of oxygen atoms, ionized to the extent of 5+, the scientists noticed that the intergalactic gas around elliptical galaxies heated to several million degrees Kelvin, whereas around the milky Way and other spiral galaxies it is heated “only” to 300 thousand degrees Kelvin. The higher the gas temperature, as scientists believe, noticeably slows down its cooling and prevents its return back to the galaxy, which deprives them of the “star materials”.