Argentina – the first finalist of the Copa America in 2016 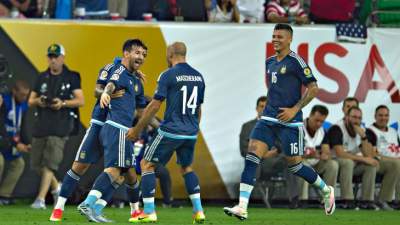 Argentina’s national team in brilliant style broke into the final of the Copa America.

In Texas, Argentina steamroller drove over to the Americans, for whom the semi-finals of the home tournament was the ceiling of their possibilities – Lionel Messi and company have easily made it to the final and were only a step away from the long-awaited international tournament.

Already in the third minute after LAVEZZI amazing transfer Messi opened the scoring, then came the turn of captain Argentines, and in the second half, it’s time for Higuain, who decided to fight with Vargas and Messi for the title of best scorer of the tournament.

What is the U.S. public? It’s hard to believe, but the U.S. team for 90 minutes did not cause any impact to the gates Romero. Perhaps this toothless games at the semifinal stage of a major international tournament had ever seen.

The opponent of Argentina in the final of the Copa America 2016 will be determined after tomorrow’s match between the national teams of Colombia and Chile.