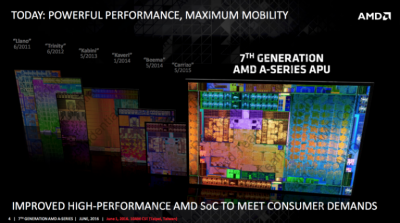 The company spoke about the upcoming OCTA-core CPU Summit Ridge, and the new mobile APUS.

At the ongoing Taiwan computer show AMD said about the upcoming eight-core CPU Summit Ridge, and the new mobile APUS seventh generation, the Bristol-Ridge and Stoney Ridge (a more compact version of the kernel).

Processors at-Bristol Ridge are produced by 28-nm process technology, have the support of DDR4 SDRAM with frequencies up to 2400 MHz for high range and 2133 MHz for the younger ones. There is a controller STAPM (Skin Temperature Aware Power Management), counting short-term increase in frequency on the components of SoC based on the temperature of the laptop casing. Also, the chips improved AVFS, which adaptively regulates the frequency and voltage based on the status information of the chip in real time.

The chipset also has got a hardware encoder/decoder H. 265 video. Now the platform supports resolutions up to 4K and is able to work with VP9 format. In the latter case, the maximum resolution — 1080p. 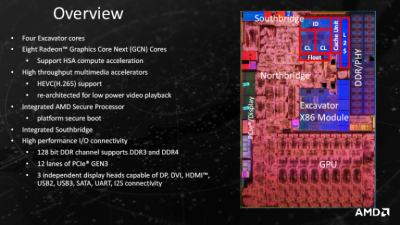 Also the representatives of the company said that this year will see the light of promising Zen CPU architecture (codenamed Summit Ridge). The processors on this architecture will focus on medium and high performance systems. They will have eight cores that can simultaneously execute up to 16 threads. In General, AMD promised a 40% increase in executable per clock instructions. For partners new processors will be available in the third quarter of this year. Thus, it can be expected that the finished products on their base will appear on sale in late 2016 or early 2017. The plans also introduction of AMD server and mobile processors based on a new architecture.