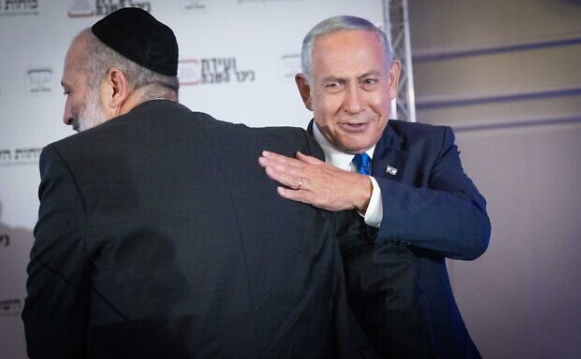 Current law bars individuals sentenced to prison time from serving as a minister for seven years. Deri was convicted of several tax offenses earlier this year and received a 12-month suspended sentence, ostensibly barring him from receiving another cabinet post.

According to a Friday Channel 12 news report, Deri approached one of Netanyahu’s former attorneys, Navot Tel-Zur, and requested that he draft a legal opinion that maintained that only individuals who were actually jailed need be barred from serving as ministers, as opposed to those who were handed suspended sentences.
Tel-Zur drafted the opinion and brought it to Netanyahu, who in turn presented it to Baharav-Miara. On Thursday night, the attorney general reportedly got back to Netanyahu, who is expected to serve as the next prime minister, informing him that she did not accept the legal opinion and that the Basic Law referred to both suspended sentences and time served.

The network, which did not cite any sources for the report, said Baharav-Miara told Netanyahu he would have to approach the head of the Central Elections Committee, Justice Yitzhak Amit, in order to receive his legal stamp of approval for appointing Deri.
Ostensibly unconvinced that the alternative route would work, Shas MK Moshe Arbel drafted a bill to change clause six of Basic Law: Government, which would allow those who were given suspended sentences to receive ministerial appointments.
The bill will likely face legal challenges as well. However, Shas and other parties of Netanyahu’s likely coalition are pushing to pass legislation that would allow the Knesset to override Supreme Court decisions.

Deri’s January criminal conviction was the second of his political career.
He previously served 22 months in prison from 2000 to 2002, after he was convicted of taking bribes while serving as interior minister. That verdict carried a conviction of moral turpitude, keeping him out of national politics.

In 2013, he returned to politics, reclaiming the leadership of Shas and ultimately returning to serve as interior minister from 2016 until last year, when his party entered the opposition. A court had ruled that his prior conviction did not disqualify him from the position.

Separately Friday, Itamar Ben Gvir’s extremist Otzma Yehudit faction announced that it will be breaking away from Bezalel Smotrich’s far-right Religious Zionism alliance and operate independently in the new Knesset.

The two parties ran together, along with the anti-LGBT Noam faction, in the November 1 elections, but made clear that their alliance was a technical one, rather than a full-on merger of their parties. All three parties have been holding separate coalition negotiations with Netanyahu.

Otzma Yehudit said it would submit its decision to break away to the Knesset’s House Committee. It appears that, for now, Noam and its chairman Avi Maoz will remain part of the Religious Zionism alliance.
The differences between the three parties are relatively subtle, but Smotrich sought to appeal to more mainstream national religious voters, campaigning on a tougher policy vis-a-vis the Palestinians and sweeping judicial reform, though he has taken anti-Arab and anti-LGBT public positions. Otzma Yehudit catered to a more extreme constituency, with much more fiery rhetoric about instituting the death penalty for terrorists, shooting to kill Palestinian stone throwers, and deporting “disloyal” Arab citizens. Noam’s audience was much smaller but was made up of in part of nationalist Orthodox Israelis known as Hardalim who believe that the country’s Jewish identity is threatened by the growing acceptance of the LGBT community and non-Orthodox forms of Judaism.
Otzma Yehudit also said in its Friday statement that Ben Gvir held a phone call with Netanyahu and clarified to him that the “bloc” between him and Smotrich would remain, explaining that he would not agree to enter Netanyahu’s government without Smotrich.

Channel 12 said the break-away would allow Otzma Yehudit to sign a separate coalition agreement from the one Likud is seeking to reach with Religious Zionism.

Ben Gvir also urged Netanyahu to accept Smotrich’s unyielding demand to be appointed defense minister, which has ground coalition negotiations to a standstill.

Ben Gvir in the statement called the Religious Zionism chairman’s demand “legitimate,” arguing that it would allow for the actualization of “full-on” right-wing policies such as the establishment of new settlements in the West Bank, the expansion of existing settlements by thousands of homes, the ending of Palestinian construction in Area C of the West Bank where the settlements sit, and an end to the evacuation of illegal outposts established by extremist Jewish settlers beyond the Green Line.
Netanyahu has been bucking Smotrich’s demand, with sources in his Likud party leaking to the media that the Likud chief fears the appointment would risk harming ties with the United States, which opposes the Religious Zionism chairman’s policies, including as regards the West Bank.

The Walla news site reported Friday that Netanyahu instead offered to appoint Smotrich as foreign minister, another scenario that would likely test Israel’s diplomatic ties with more liberal countries abroad given their opposition to Smotrich’s far-right beliefs.

However, Smotrich rejected the demand outright, according to Walla.

Channel 12 reported that Likud also offered Smotrich’s party the justice and education portfolios along with a ministerial position within the Prime Minister’s Office that would be in charge of defense matters relating to the West Bank.
Smotrich has insisted on being appointed either defense or finance minister — demands Netanyahu has been reluctant to accept and with the latter portfolio promised to Deri.

According to a Thursday unsourced Channel 12 report, Likud offered a compromise whereby Smotrich would be appointed finance minister but some of his authorities would be transferred to Deri in the Interior Ministry, possibly the Budgets Department and Companies Authority.
Meanwhile, Ben Gvir, who ran with Smotrich on the joint Religious Zionism slate that won 14 seats together, is also at odds with Likud over a demand that Otzma Yehudit receive either the education or transportation portfolio as its second most senior role, Haaretz reported.

Ben Gvir is expected to receive the Public Security Ministry, in charge of police, as he has demanded. The posting has worried Israel’s opposition as well as international observers in light of the far-right lawmaker’s incendiary background, which includes convictions for supporting a terror group and incitement to racism, and his demand for the right to Jewish prayer on the Temple Mount.

The two sides are said to have agreed that UTJ chair Yitzhak Goldknopf will be appointed housing minister, while MK Moshe Gafni will head the Knesset’s Finance Committee. But the network said several of UTJ’s demands on legislation have so far gone unanswered — including additional scholarships for yeshiva students and legislation absolving Haredi men of the military draft.

In what may further drag on the coalition talks, Channel 12 reported Friday that Smotrich was planning to fly to New York next week for several days to attend a convention held by the Chabad movement.

Netanyahu officially received a mandate to form a government last Sunday, giving him 28 days to assemble a majority coalition.
If he needs more time, he could seek a 14-day extension from President Isaac Herzog.