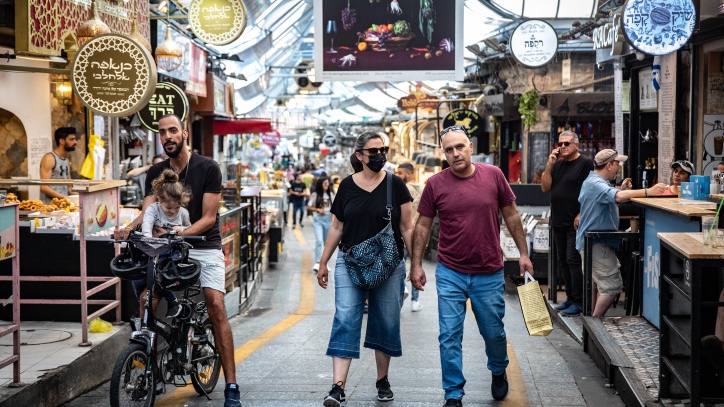 Your guide to all the best food in the ‘shuk’ in downtown Jerusalem – come hungry, because you won’t be disappointed.

The Mahaneh Yehuda Shuk (Tribe of Judah Market) is as integral to the city of Jerusalem as blood is to a beating heart.

It’s where the locals go for their weekly grocery shopping, and tourists visit to get a taste (literally) of Israeli culture.

From its humble beginning in the Mahaneh Yehuda neighborhood at the end of the 19th century, it has survived under Ottoman rule, the British Mandate, major renovations, and even deadly terror attacks.

What started as a few stalls in an empty plot was later expanded to an open-aired shuk, a partially-covered shuk, and the Iraqi Shuk, from which you can choose between 250 vendors.

You can find anything from aromatic spices, hot-out-of-the-oven bread, wines and liquor, fresh produce, meats and fish, candies and sweets, clothing, houseware, Judaica, and more.

If you’ve never been to an outdoor market, you can expect a sensory overload of the smells of spices and food, vendors yelling out lucrative bargains, customers haggling for a lower price, and the distinct sounds of ‘shuk cart’ wheels on the narrow pavement.